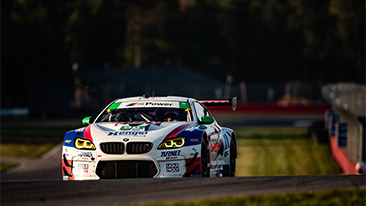 Woodcliff Lake, N.J. – Oct. 7, 2020 . . . BMW Team RLL looks to extend its podium-finishing streak to five races in-a-row at the October 10th Motul 100% Synthetic Grand Prix. The race is the second GT class-only race of the 2020 IMSA WeatherTech SportsCar Championship season and will offer up some significant differences from recent races. The event will be held at Charlotte Motor Speedway’s 2.32-mile, 10-turn “roval” circuit – a first for IMSA – and at only 100 minutes long will be the shortest race of the season. As the undercard to NASCAR weekend the race will be held at night.

“It is an interesting looking racetrack,” said Bobby Rahal, Team Principal. “I’m sure IMSA will put on a good show for a market that knows motorsport.”

Bill Auberlen and Robby Foley, co-drivers of the No. 96 Turner Motorsport BMW M6 GT3, the winners at Virginia International Raceway three rounds ago have had two difficult races at Road Atlanta and Mid-Ohio, will be looking to rebound at Charlotte.

Both BMW Team RLL and Turner Motorsport participated in a Michelin tire test at Charlotte prior to the Mid-Ohio race.

The Motul 100% Synthetic Grand Prix is scheduled to take the green flag at 8:05 p.m. on Saturday, October 10th and will be broadcast live on NBCSN from 8:00 to 10:00 p.m. ET. Follow us on Twitter @BMWUSARacing for news from the pit box and get live scoring and in-car camera views at IMSA.com.

John Edwards, Driver No. 24 BMW M8 GTE: “For the first time ever I have a home race. Charlotte is a new track for everyone, it will be an interesting challenge. The layout is very tricky, so I am pleased we were able to test there and gather data. That will be a help as the first practice session will be a night session.”

Jesse Krohn, driver No. 24 BMW M8 GTE: “I like the track. It requires high commitment, and the walls are very confining. The infield section is definitely dark and will add to the difficulty. Overall, the team has been showing our strength and Charlotte should be no different.”

Connor De Phillippi, driver No. 25 BMW M8 GTE: “The Charlotte Roval is going to be a wild race. After the tire test it was clear there will be a lot of tire degradation and I can foresee some pretty aggressive overtaking due to the track being a single line for most of the circuit. Looking forward to my first home race on the East coast!”

Bruno Spengler, driver No. 25 BMW M8 GTE: “I was unable to join the recent Michelin test because I was at Le Mans so it will be important to gather as many laps as I can. That is nothing new as most every track is new to me this season.”


BMW Group In America
BMW of North America, LLC has been present in the United States since 1975.  Rolls-Royce Motor Cars NA, LLC began distributing vehicles in 2003.  The BMW Group in the United States has grown to include marketing, sales, and financial service organizations for the BMW brand of motor vehicles, including motorcycles, the MINI brand, and Rolls-Royce Motor Cars; Designworks, a strategic design consultancy based in California; technology offices in Silicon Valley and Chicago, and various other operations throughout the country.  BMW Manufacturing Co., LLC in South Carolina is the BMW Group global center of competence for BMW X models and manufactures the X3, X4, X5, X6 and X7 Sports Activity Vehicles. The BMW Group sales organization is represented in the U.S. through networks of 349 BMW passenger car and BMW Sports Activity Vehicle centers, 146 BMW motorcycle retailers, 117 MINI passenger car dealers, and 38 Rolls-Royce Motor Car dealers.  BMW (US) Holding Corp., the BMW Group’s sales headquarters for North America, is located in Woodcliff Lake, New Jersey.