Spectacular weekend for BMW M Motorsport with starts in the FIA WEC, DTM and the IMSA series. 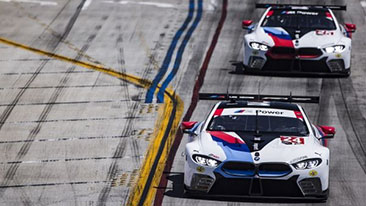 Woodcliff Lake, N.J. – Apr. 30, 2018… This weekend, the IMSA WeatherTech SportsCar Championship returns to the Mid-Ohio Sports Car Course, in Lexington, Ohio, for the first time since 2012 and sees BMW Team RLL back at its home circuit, just over an hour’s drive from the team’s Hilliard, Ohio base.

The two-hour-and-forty-minute Acura Sports Car Challenge at Mid-Ohio race is the fourth round of the 2018 season. BMW stands fourth in GTLM class manufacturer points and the new BMW M8 GTE is seventh and eighth in the team standings. With a season’s best finish of second by Bill Auberlen, Connor De Phillippi and Alexander Sims, driving the No. 25 M8 GTE, at the 12 Hours of Sebring, De Phillippi and Sims stand seventh in driver points. John Edwards and Jesse Krohn, season-long drivers of the No. 24 M8 GTE, stand eighth.

Mid-Ohio is one of North America’s most popular permanent road circuits. A 2.258-mile roller coaster ride through more than a dozen turns, the track is very challenging. To all BMW Team RLL drivers except Edwards (and, of course, Auberlen) it will be a completely new experience, but De Phillippi, Krohn and Sims can rely on sage advice from Auberlen as well as from Bobby Rahal, who first raced at Mid-Ohio in 1974.

“I think the M8 should be competitive, regardless of what type of track we race on,” said Bobby Rahal, Team Principal.  “For us, it really depends on the BoP but certainly we’ve always had some good luck at Mid-Ohio and hopefully that will continue to be the case. It will be interesting since no one has raced there in at least five years. No one has any real background on the cars we are racing today so we’re going there with a clean sheet of paper. We always have a lot of supporters at Mid-Ohio and the fact that BMW Team RLL is based outside of Columbus makes it a special event for us. You always like to perform in front of your home fans.”

Connor De Phillippi, driver No. 25 BMW M8 GTE: “Mid-Ohio is a big event for us as a team. With our RLL team shop in close proximity, we will look to maximize the strengths of our M8 to get us back up on the podium. It is a new track for me so there will have to be a fast learning curve, but I’m fortunate to have a very knowledgeable team around me to lean on for support. I’m looking forward to the challenge!”

Alexander Sims, driver No. 25 BMW M8 GTE: “I’m pretty excited by the challenge of Mid-Ohio, it’s completely new to me so I’ve not got a whole load of expectations heading into the weekend. We will need to work hard to find a good base as quickly as possible and try to get on top of the car and driving to make sure we are competitive.”

John Edwards, driver No. 24 BMW M8 GTE: “I haven’t raced at Mid-Ohio since the Grand Am series, but it’s somewhat of a home race for me as well as the team so I’m excited to be back! I lived in Cincinnati and my parents still live there so I should have a pretty big fan base in the state. It’s a great track with one corner flowing into the next which takes a good rhythm to get a fast lap put together. I’m looking forward to the challenge and to rebounding from a difficult weekend at Long Beach.”

Jesse Krohn, driver No. 24 BMW M8 GTE: “Mid Ohio is another new track for me this season. I hope we can be more competitive at Mid Ohio than we were at Long Beach. The team and BMW Motorsport is doing a great job developing the car and I hope we will soon be able to be in the mix with others to fight for podiums and race wins.”

The ACURA Sports Car Challenge at Mid-Ohio will take the green flag at 1:05 p.m. ET on Sunday, May 6th and be broadcast on live on FOX Sports 2 beginning at 1:00 p.m. ET. Follow BMW Team RLL on Twitter at @BMWUSARacing for “from-the-pit-box” updates all weekend.

BMW Group in America
BMW of North America, LLC has been present in the United States since 1975.  Rolls-Royce Motor Cars NA, LLC began distributing vehicles in 2003.  The BMW Group in the United States has grown to include marketing, sales, and financial service organizations for the BMW brand of motor vehicles, including motorcycles, the MINI brand, and the Rolls-Royce brand of Motor Cars; Designworks, a strategic design consultancy based in California; a technology office in Silicon Valley and various other operations throughout the country.  BMW Manufacturing Co., LLC in South Carolina is part of BMW Group’s global manufacturing network and is the exclusive manufacturing plant for all X5 and X3 Sports Activity Vehicles and X6 and X4 Sports Activity Coupes.  The BMW Group sales organization is represented in the U.S. through networks of 344 BMW passenger car and BMW Sports Activity Vehicle centers, 153 BMW motorcycle retailers, 127 MINI passenger car dealers, and 36 Rolls-Royce Motor Car dealers.  BMW (US) Holding Corp., the BMW Group’s sales headquarters for North America, is located in Woodcliff Lake, New Jersey.