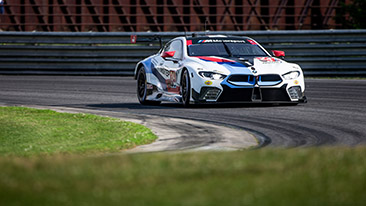 Woodcliff Lake, N.J. – July 20, 2019…BMW Team RLL finished seventh and eighth in today’s two-hour-and-forty-minute IMSA WeatherTech SportsCar Championship Northeast Grand Prix at Lime Rock Park, in Lakeville, Conn. Tom Blomqvist and Connor De Phillippi finished seventh in the No. 25 BMW M8 GTE after starting third. John Edwards and Jesse Krohn, driving the No. 24 M8 GTE, finished in eight place unable to improve on their qualifying position. Overall today’s result comes as a disappointment after the team had such a strong performance at the last race, starting from the front row and finishing second and fourth, at Canadian Tire Motorsport Park.

Struggling with the high ambient and track temperature today the hope for a good result quickly ended with Edwards pitting the No. 24 M8 GTE after only 39 laps for tires. Both Edwards and Krohn played catch up for the rest of the race, ultimately pitting twice more, but the absence of any caution periods did not allow them the chance to gain any track position. The No. 25 M8 GTE looked to be having a strong day, starting from the third position, but a third pit stop for left side tires with only six laps remaining dropped the car from a top-five finish.

“We certainly had high hopes for the race after qualifying – especially with the No. 25 M8 GTE starting third.” said Brandon Fry, RLL Technical Director. “The No. 24 M8 GTE had an issue early in the race and with this being a fully green flag race, it was always going to be tough to make that time up that again. The tire degradation of the No. 24 car was just not predictable and with that being the deciding factor here at Lime Rock, we just fell out of the running.”

The next round of the IMSA WeatherTech SportsCar Championship will be held on Aug. 4 at Road America, in Elkhart Lake, Wisconsin. The two-hour-and-forty-minute race will take the green flag at 2:35 p.m. and is scheduled to be broadcast later that day on NBCSN from 6:00 p.m. to 9:00 p.m.

Tom Blomqvist, driver No. 25 BMW M8 GTE (P7): “The only real positive to take from this race was our pace in qualifying with how tough we knew this track was going to be for us. It was a tough race for everyone but we just didn’t execute flawlessly and in this series any small mistake can set you back.”

Connor DePhillippi, driver No. 25 BMW M8 GTE (P7): “Tire management was really tough today with the heat. We certainly set the bar high for ourselves after qualifying, but we just couldn’t translate that pace to the race.”

John Edwards, driver No. 24 BMW M8 GTE (P8): “Days like today are really tough to stomach. Early in the race we ended up behind and just never got the opportunity to make that time up again. However, days like today makes our podium feel even better.”

Jesse Krohn, driver No. 24 BMW M8 GTE (P8): “Today was not what we expected, but we could not execute the strategy to get a result. We need to look at the data and see where we can improve for Road America.”

Bill Auberlen and Robby Foley raced the No. 96 BMW M6 GT3 to a third place finish in the GT Daytona class today, completing 178 laps in the two-hour-and-forty-minute Northeast Grand Prix and finishing only 6.68 seconds from the winning Porsche 911 GT3 R. With a third place finish today Turner Motorsport has strung together three consecutive podium finishes, beginning with a second at Watkins Glen International and a victory in the most recent round at Canadian Tire Motorsport Park.

“We had a team discussion a little while ago, and we said, “You know what? Besides the Acura in first place, from second down the championship is wide open.” said Will Turner, Team Principal. “So we took a step back and really focused on the big picture, being consistent, and not trying to win everything and pushing too hard over these races. I don’t know if it is just luck or the team really gelling but obviously we’ve gotten two podiums and a win over the last three races. Looking toward the next races we are going to tracks where we can really open up the twin turbo V8 of the BMW M6 GT3 and continue this momentum.”

Bill Auberlen, driver No. 96 BMW M6 GT3 (P3): “At Lime Rock with the BMW M6 GT3, this podium is like a victory for us. It is now on to Road America. I think the car is going to love it there. Hopefully, it will be a little cooler there because with how hot it was today in the car. During my double stint I was just counting the seconds to when I could get into an air conditioned room.”

Robby Foley, driver No. 96 BMW M6 GT3 (P3): “We are hitting a real stride here. At the start I made a small mistake to lose third, but Bill ended up making that place back up later on. For us we have great momentum and the feeling within the team is really positive so we are just looking at continuing to let the results come to us and not try and force anything.”

James Clay (US) and Devin Jones (US) drove their No. 82 BimmerWorld Racing BMW M4 GT4 to a fourth place finish in today’s two-hour IMSA MICHELIN Pilot Challenge Lime Rock Park 120. The result drops Clay and Jones to second place – three markers from first – in the Grand Sports class Driver and Team points standings. After a strong start, a left rear puncture and resulting pit stop slowed the progress of the No. 96 Turner Motorsport BMW M4 GT4 causing Bill Auberlen (US) and Robby Foley (US) to ultimately finish 10th.

Round 7 of the 2019 IMSA MICHELIN Pilot Challenge, the Road America 120, will take place on Aug. 3 at Road America, in Elkhart Lake, Wis.

BMW Group In America
BMW of North America, LLC has been present in the United States since 1975.  Rolls-Royce Motor Cars NA, LLC began distributing vehicles in 2003.  The BMW Group in the United States has grown to include marketing, sales, and financial service organizations for the BMW brand of motor vehicles, including motorcycles, the MINI brand, and Rolls-Royce Motor Cars; Designworks, a strategic design consultancy based in California; technology offices in Silicon Valley and Chicago, and various other operations throughout the country.  BMW Manufacturing Co., LLC in South Carolina is the BMW Group global center of competence for BMW X models and manufactures the X3, X4, X5, and X6 Sports Activity Vehicles. The BMW Group sales organization is represented in the U.S. through networks of 348 BMW passenger car and BMW Sports Activity Vehicle centers, 148 BMW motorcycle retailers, 123 MINI passenger car dealers, and 38 Rolls-Royce Motor Car dealers.  BMW (US) Holding Corp., the BMW Group’s sales headquarters for North America, is located in Woodcliff Lake, New Jersey.

Rahal Letterman Lanigan RacingBMW’s partner, Rahal Letterman Lanigan Racing, based in Hilliard, Ohio and co-owned by three-time IndyCar Champion and 1986 Indianapolis 500 winner Bobby Rahal, former CBS Late Show host David Letterman and Mi-Jack co-owner Mike Lanigan, has been competing for almost three decades. Prior to the start of their 27th season of competition in 2018, the team had compiled 42 victories, 53 poles, 162 podium finishes, three series championships (1992, 2010, 2011) and claimed an Indianapolis 500 victory (Buddy Rice in 2004). In 2009 the team joined BMW of North America to campaign the new BMW M3 in the American Le Mans Series. The following year the team won both the Manufacturer and Team Championships in the GT category and swept all three GT titles – Manufacturer, Team and Driver – in 2011. In 2012, the team finished second in the Team Championship and third in the Manufacturer Championship and in 2013, the team finished second in the Driver, Team and Manufacturer Championship. Since 2014, BMW Team RLL has competed in the GTLM class of the IMSA WeatherTech SportsCar Championship with a two car program and has brought their total to 17 wins, 23 poles and 68 podium finishes as well as a second place finish in the Manufacturer, Team and Driver championships in 2015 and 2017.