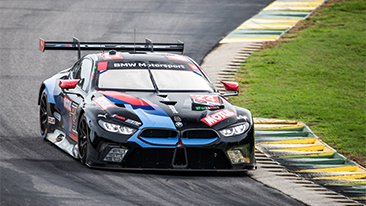 The story of the day and the 2020 IMSA seasons so far was the victory in the GTD class by Bill Auberlen and Robby Foley in the No. 96 Turner Motorsport BMW M6 GT3. The win marked Auberlen’s 61st IMSA victory and moves the driver synonymous with The Ultimate Driving Machine® to the top of the standings in all-time IMSA victories. Today’s race marked Auberlen’s 443rd race start in a BMW, also a record.

An elated Auberlen stated, “I am humbled to own this record and dedicate it to my mom and dad. My thanks to BMW for having the faith in me to sign me back in 1996. I have been lucky to have many great co-drivers and Robby (Foley) was the man today, driving two great stints and making it look easy. To everyone at Turner Motorsport, my second home, I’m delighted to have shared this with you all. Now, let’s go see about win number 62.”

“Today was quite a day for Bill and BMW of North America’s racing programs,” said Victor Leleu, BMW NA Motorsport Manager. “Bill has been an integral part of our motorsport team through the years and we could not be happier for him to have achieved this record. There is no one better.”

Up next is the TireRack.com Grand Prix at Michelin Raceway Road Atlanta on Saturday, Sept. 5. The 6-hour race will take the green flag at 11:35 a.m. and will be broadcast on NBC Sports Gold Track Pass streaming service beginning at 11:30 a.m. Follow us on Twitter @BMWUSARacing for news from the pit box and get live scoring and in-car camera views at IMSA.com.

Connor De Phillippi, driver No. 25 BMW M8 GTE (P2): “It feels great to get our first podium finish. We drove hard and clean to put ourselves in a position to fight for the win and at the checkered flag were only one step away from the top of the podium. We’ll soon get Bruno (Spengler) his first IMSA win.”

Bruno Spengler, driver No. 25 BMW M8 GTE (P2): “I entered the race with only very few laps of practice and had to really focus. Connor (De Phillippi) did a great job and when I got in the car my target was clear – to finish on the podium. I found my rhythm, but the competition did not make it easy. I am delighted with our effort.”

BMW Group In America
BMW of North America, LLC has been present in the United States since 1975.  Rolls-Royce Motor Cars NA, LLC began distributing vehicles in 2003.  The BMW Group in the United States has grown to include marketing, sales, and financial service organizations for the BMW brand of motor vehicles, including motorcycles, the MINI brand, and Rolls-Royce Motor Cars; Designworks, a strategic design consultancy based in California; technology offices in Silicon Valley and Chicago, and various other operations throughout the country.  BMW Manufacturing Co., LLC in South Carolina is the BMW Group global center of competence for BMW X models and manufactures the X3, X4, X5, X6 and X7 Sports Activity Vehicles. The BMW Group sales organization is represented in the U.S. through networks of 349 BMW passenger car and BMW Sports Activity Vehicle centers, 144 BMW motorcycle retailers, 118 MINI passenger car dealers, and 38 Rolls-Royce Motor Car dealers.  BMW (US) Holding Corp., the BMW Group’s sales headquarters for North America, is located in Woodcliff Lake, New Jersey.