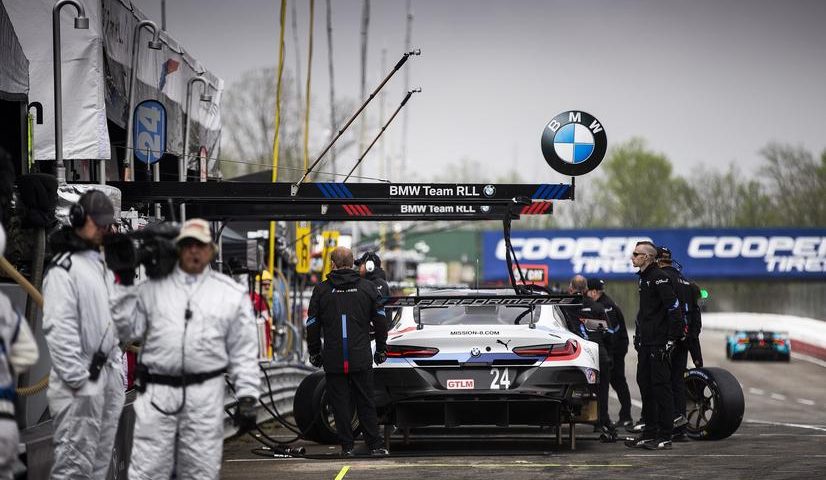 Woodcliff Lake, N.J. – May 5, 2018… BMW Team RLL registered fourth and sixth place finishes in today’s Acura Sports Car Challenge at Mid-Ohio, the fourth round of the IMSA WeatherTech SportsCar Championship. Tom Blomqvist and Connor DePhillippi finished fourth in the No. 25 BMW M8 GTE, 4.374 seconds behind the winning No. 912 Porsche 911 RSR and two positions ahead of their teammates John Edwards and Jesse Krohn in the No. 24 BMW M8 GTE.

After two days of inclement weather, bright sunshine meant each stint of the two-hour-and-forty-minute race was a sprint on dry Michelin tires. Jesse Krohn, starting the No. 24 BMW M8 GTE, and Connor DePhillippi, starting the No. 25 BMW M8 GTE raced in third and fifth GTLM class positions through the first 30 minutes of the race. DePhillippi pitted first on lap 27 to hand off to Tom Blomqvist. Krohn pitted five laps later and, following quick service, Edwards joined the race. Unfortunately, he slid off the track on his out lap and dropped back in the field. At the midpoint of the race Blomqvist was back to third and Edwards raced in seventh. Both BMWs pitted for the second and final time under green with an hour to go. Blomqvist and Edwards stayed in their cars for the run to the checkered flag. An exciting 60 minutes followed with Blomqvist battling with the No. 911 Porsche for the last step on the podium, only to lose the position following an aggressive pass in the closing laps. Edwards ran as high as fifth, but ultimately finished sixth.

“Little bit of a tough day. Congrats to Porsche.” said Brandon Fry, RLL Technical Director. “Outside of that, it was a pretty close battle with the rest of the field. We just didn’t get the best out of today but all of our guys pushed hard until the end. We look forward to Watkins Glen and to having a big race there. We have a couple of tests coming up and we have a few more things to work on.”

Following the traditional break in the IMSA schedule for teams competing in the 24 Hours of Le Mans, the fifth round of the 2019 WeatherTech SportsCar Championship, the Sahlen’s Six Hours of the Glen, will take place at Watkins Glen International on June 30.

Tom Blomqvist, driver No. 25 BMW M8 GTE (P4): “Being so close to the podium and missing out is always difficult. We were fighting for that last podium spot but just fell short. The team did a great job this weekend preparing the car. We will take the points and the learnings away and improve for the next race.”

Connor DePhillippi, driver No. 25 BMW M8 GTE (P4): “P4 today here in Mid-Ohio. Certainly we are moving forward. We knew we had a better race pace than we did yesterday in qualifying. We ran a mistake free race and did the best we could with what we had today. You have to keep learning and keep pushing ahead in these next few events. We are just missing a little bit next to the competition. I know we have the right guys in the workshop to take care of it. We’ll look through the data post-race and try to be better at the next one.”

John Edwards, driver No. 24 BMW M8 GTE (P6): “We had a great car. Jesse did a great job and the team handled the pit stops perfectly. I lost about 20 seconds on the first corner of my out lap, an inexcusable mistake by me. Very disappointing when we had such a good car.”

Jesse Krohn, driver No. 24 BMW M8 GTE (P6): “I got boxed in at the start and I lost a few positions. Everyone was defending very aggressively today so it was difficult to get those spots back. I think we had a good car and we can certainly learn on how to improve for the next race.”

The No. 96 Turner Motorsport BMW M6 GT3 was knocked out of today’s race on the opening lap as starting driver Robby Foley was involved in an altercation with a competitor. Co-driver Bill Auberlen did not drive.

BMW of North America, LLC has been present in the United States since 1975. Rolls-Royce Motor Cars NA, LLC began distributing vehicles in 2003. The BMW Group in the United States has grown to include marketing, sales, and financial service organizations for the BMW brand of motor vehicles, including motorcycles, the MINI brand, and Rolls-Royce Motor Cars; Designworks, a strategic design consultancy based in California; technology offices in Silicon Valley and Chicago, and various other operations throughout the country. BMW Manufacturing Co., LLC in South Carolina is the BMW Group global center of competence for BMW X models and manufactures the X3, X4, X5, X6 and X7 Sports Activity Vehicles. The BMW Group sales organization is represented in the U.S. through networks of 347 BMW passenger car and BMW Sports Activity Vehicle centers, 148 BMW motorcycle retailers, 123 MINI passenger car dealers, and 37 Rolls-Royce Motor Car dealers. BMW (US) Holding Corp., the BMW Group’s sales headquarters for North America, is located in Woodcliff Lake, New Jersey.