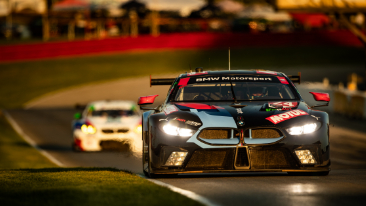 Bill Auberlen and Robby Foley shared a disappointing day in the No. 96 Turner Motorsport BMW M6 GT3. Starting driver Foley was hit by a prototype car on lap 24 and, following repairs by the crew, returned to the race some 25 laps down to the GT Daytona class leaders. Bill Auberlen did drive the second half of the race but was unable to make up any the of lost ground.

The next round of the 2020 IMSA WeatherTech SportsCar Championship will take place on October 10 at the Charlotte Motor Speedway with a 100-minute GT-only race on the track’s “Roval”. Follow us on Twitter @BMWUSARacing for news from the pit box and get live scoring and in-car camera views at IMSA.com.


BMW Group In America
BMW of North America, LLC has been present in the United States since 1975.  Rolls-Royce Motor Cars NA, LLC began distributing vehicles in 2003.  The BMW Group in the United States has grown to include marketing, sales, and financial service organizations for the BMW brand of motor vehicles, including motorcycles, the MINI brand, and Rolls-Royce Motor Cars; Designworks, a strategic design consultancy based in California; technology offices in Silicon Valley and Chicago, and various other operations throughout the country.  BMW Manufacturing Co., LLC in South Carolina is the BMW Group global center of competence for BMW X models and manufactures the X3, X4, X5, X6 and X7 Sports Activity Vehicles. The BMW Group sales organization is represented in the U.S. through networks of 349 BMW passenger car and BMW Sports Activity Vehicle centers, 144 BMW motorcycle retailers, 117 MINI passenger car dealers, and 38 Rolls-Royce
Motor Car dealers.  BMW (US) Holding Corp., the BMW Group’s sales headquarters for North America, is located in Woodcliff Lake, New Jersey.