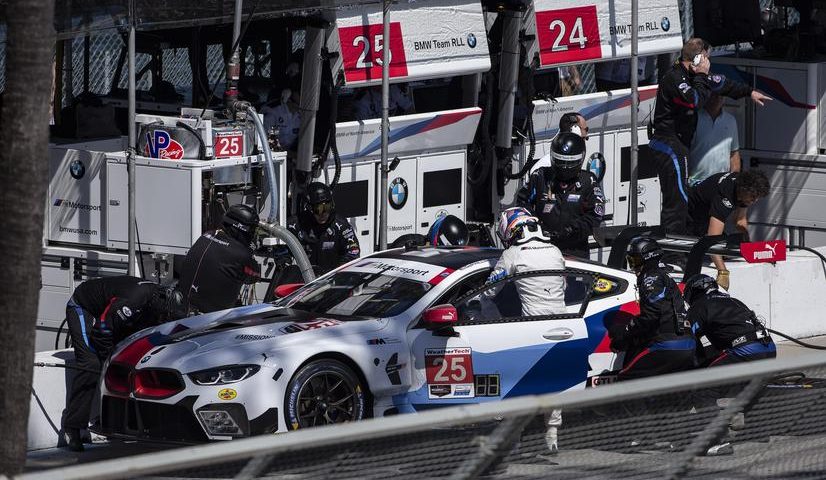 Woodcliff Lake, N.J. – April 13, 2018… Despite disappointing seventh and eighth place GTLM class finishes in today’s IMSA BUBBA burger Sports Car Grand Prix at Long Beach, both BMW Team RLL BMW M8 GTE machines showed the best pace of the weekend and the increased speed is an encouraging sign for the upcoming races. Unfortunately, the 1.968-mile, 11-turn temporary street circuit did not play to the strengths of the BMWs and a rare unforced error during the race’s only pit stop ruined what could have been a reasonable day.

The No. 25 BMW M8 GTE, driven by Tom Blomqvist and Conner DePhillippi, finished seventh. John Edwards and Jesse Krohn finished eighth in the No. 24 BMW M8 GTE. Edwards was running fifth before the pit stop, but a loose right rear wheel nut on the tire change forced Krohn to stop as soon as he left the pit box so the team could reattach the wheel. Because this was done outside of the box, stewards called the car in for a drive through penalty ending a good start. The 100-minute race was won by the No. 912 Porsche.

Round Four of the 2019 IMSA WeatherTech Sports Car Championship will be held on May 5th at the Mid-Ohio Sports Car Course, in Lexington, Ohio.

“We felt going in that this circuit was not going to be in our wheelhouse, as they say. We won Daytona due to the sheer brilliance of our drivers in the rain and not so much on our pace. We did not have the pace in Sebring by any means so it is disappointing to come to a circuit where you are probably at a little bit of a disadvantage anyway but then bad luck makes it worse. All we can do is to keep working hard and doing what we can do and hope that are able to find the pace compared to the other teams who currently have an advantage on us.”

“We simply did not have the pace this weekend to really challenge the competition. We just had to run a smart race but there simply was not enough that happened (in GTLM) for us to make any gains. So, now we look ahead now to Mid-Ohio, a track that should suit us a bit more.”

“During the first part of my stint we seemed very competitive and I was happy with the car in comparison to yesterday. As the stint went on however, the others just seemed to have a bit more pace than we did but we knew that this weekend was going to be a learning weekend for us. The next three tracks suit our car really well and we will focus on getting some podiums and wins in the next events.”

“A disappointing result but the car was much improved over yesterday’s qualifying so our pace was a bit better. As we evolve the car I think we will be more prepared for Long Beach next year. Unfortunately it is a very short weekend so if the car is not right in qualifying you start in the wrong spot. We were able to move up a couple of spots but then had trouble on the pit stop and this is the one race per year when the pit stops matter most. We had to rush the stop and unfortunately it bit us. I was encouraged by the balance of the car however and I think we will be a lot better when we return to this street course next year.”

“Today was difficult. At the end of the day we didn’t have a bad race car, we just got a little bit unlucky in the pit stop. Something happened with the rear tire, I do not know exactly what but that basically put us nearly a lap down which you just cannot recover from in a short race such as Long Beach. Overall, I am happy with the steps we made with the car and even starting last, without the tire issue, there was a chance to maybe make something happen. I needed to save my tires in case there was another full course yellow and I could catch up to the pack and then we have a little bit more tire than the others but that chance never came.”