Coachella 2017: BMW i debuts as an exclusive partner of the acclaimed music festival. 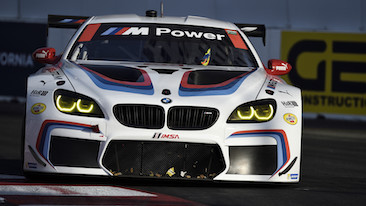 Woodcliff Lake, N.J. – April 8, 2017… BMW Team RLL finished a season’s-best fourth and seventh in today’s BUBBA burger SportsCar Grand Prix of Long Beach, but it was not the result the team had worked so hard for.

The No. 25 BMW M6 of Bill Auberlen and Alexander Sims finished fourth while the No. 24 M6 of John Edwards and Martin Tomczyk salvaged seventh place after a power loss due to a temporary electrical issue dropped Tomczyk from the lead of the race with only 10 minutes remaining. For the first 90 minutes of the race BMW Team RLL was in control of the race, executing a strategy that put the team in position for the M6 GTLM program’s first win.

The concrete-walled, unforgiving environs of a temporary street circuit showed its teeth only one minute after the green flag flew to start the 100-minute street fight as one prototype and three of the leading GTLM cars were involved in an incident that created the first caution period of the contest. Bill Auberlen, starting the No. 25 M6 from the fifth position, skillfully dodged the wreckage and moved into second place. John Edwards also gained three positions, moving into fourth.

A second yellow flag for debris on track waved 16 minutes later and the team quickly decided to split strategies, pitting Edwards for fuel, tires and to hand off to Martin Tomczyk. Auberlen stayed out, conserving his second place position while Tomczyk rejoined the field, still in the fourth spot. Auberlen was called to the pits on lap 25, handing off to Alexander Sims who rejoined the field in the eighth position following a full service stop that would see the M6 to the end of the race, 57 minutes in the future. As other competitors pitted Tomczyk inherited the lead of the race on lap 29.

The German Motorsport driver took over as the race’s overall leader on lap 34 as the faster prototype cars pitted during the race’s fourth caution period. Tomczyk led the field to the green flag with the news from the crew that he had enough fuel to reach the checkered flag. Sims circulated further back in the field in the sixth position.

Tomczyk controlled the class lead during two more restarts, but with only 10 minutes remaining a loss of power due to a temporary electrical issue slowed the No. 24 machine. He quickly power cycled the system to reset the computers, but within a few hundred feet was swallowed up by the field. He ultimately finished seventh. Sims took advantage of a last lap incident in turn 11 and squeezed by stopped cars to grab the fourth position.

“It was a shame to have an electrical issue within sight of the checkered flag,” said Bobby Rahal, Team Principal. “Our strategy was certainly working and Martin was doing a great job, but today was not our day. I’m sure everyone is disappointed, but on the positive side we seem to on pace with the rest of the field.”

Bill Auberlen, driver No. 25 BMW M6 GTLM (P4): “Because of circumstances I was able to gain positions early. I was hoping to be the car that pitted first when our strategy was split, but our teammates got the call and it probably would have won them the race except for their late race electrical issue. We are still a work in progress, but we are certainly making progress. We don’t have that first win, but I sense it isn’t too far away now.”

Alexander Sims, driver No. 25 BMW M6 GTLM (P4): “In the first couple of laps, Bill took advantage of an incident and then ran in second for his entire stint. We pitted on probably a more conservative strategy quite honestly and that was what put us behind a bunch of cars. In the middle of my stint I felt that this one had gotten away from us and then with various incidents and full course yellows we were able to pick up a few spots. We ended up fourth and for me coming into it at Long Beach I learned a lot, got into the groove and did some solid laps. When you run in second, you think you can be on the podium but it wasn’t to be for us today. In the end we still came away with a fairly sensible result.”

John Edwards, driver No. 24 BMW M6 GTLM (P7): “We ran a great race. We were on an alternate strategy which paid off with a lot of yellows but unfortunately we had an electrical issue that took us out of contention so it’s pretty heartbreaking.”

Martin Tomczyk, driver No. 24 BMW M6 GTLM (P7): “It looked quite good for us from the beginning of the weekend but unfortunately our luck turned against us in the race. We ran a good strategy, quite a risky strategy, but it worked out due to the yellows that allowed us to save enough fuel to make it to the end. It was quite tough to drive but the performance was good. Unfortunately we had a technical issue with the car that ended our hopes for a podium.”

Up next for the IMSA WeatherTech SportsCar Championship is the Advance Auto Sports Showdown at the Circuit of the Americas, in Austin, Texas on Saturday, May 6th. Follow BMW Team RLL on Twitter at @BMWUSARacing for “from-the-pit-box” updates all weekend.