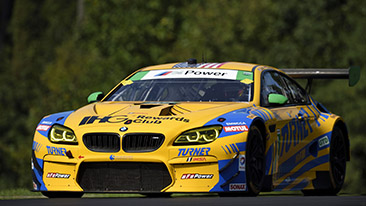 A run of six podium finishes by the team, including two wins by Auberlen and Sims, in four consecutive races ended with sixth and eighth place finishes at Road America. The classic 3.27-mile, 17-turn circuit, in Alton, Va., has only surrendered one podium to BMW Team RLL (Edwards, Dirk Mueller – 2014) so, with only three races remaining this season, the two-hour-and-forty-minute race at VIR takes on increased significance. Adding pressure, a two-day test at the track in June had to be aborted following an accident so the team will have to rely on data from the 2016 event where they finished fifth and eighth.

“We haven’t won at VIR but have certainly run competitively,” said Bobby Rahal, Team Principal. “We have had a troubled history where we have qualified well but have been taken out. There is a lot of contact in this race traditionally which has happened quite a few times so it’s been a little bit of a frustration for us. It’s a hard race and largely a track-position race in a lot of respects. Traffic plays a huge role in the race and there are long straight-aways so acceleration off the corner and top speed is pretty critical at VIR. We feel pretty good about our chances. It’s just a matter of putting good laps together in qualifying and staying out of trouble so we can be in the hunt. We look forward to it and hopefully we can overcome the disappointment at Elkhart Lake and bring home another win for BMW.”

Bill Auberlen, driver No. 25 BMW M6 GTLM: “VIR is an amazing track that should suit the M6. It’s almost a 4 way tie for first in the championship with 3 races to go. We need perfection from here to the season’s end.”

Alexander Sims, driver No. 25 BMW M6 GTLM: “Virginia should be good fun, as having had a few laps in testing to get used to it, it certainly had a great flow to it and hopefully our BMW will work well there. It’s a bit slower than some of the other circuits we’ve been strong at so we’ll have to be at the top of our game to take it to our competitors, I go there though feeling optimistic we can get a bit of momentum back to our championship challenge.”

John Edwards, driver No. 24 BMW M6 GTLM: “VIR is one of the best circuits in the US, and it’s a GT only battle which means the competition will be as fierce as ever in GTLM. Usually we can try to use prototype traffic to our advantage, but with no prototypes on track we will be fighting for every last thousandth of a second. I’m excited to get back to racing!”

Martin Tomczyk, driver No. 24 BMW M6 GTLM: “VIR definitely has a great layout. Unfortunately, I did not have the chance to go testing on this track. After the very disappointing weekend in Road America I am looking forward fighting for the podium again. We are motivated for the last third of the season.”