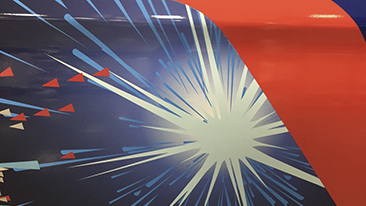 Woodcliff Lake, N.J. – June 27, 2017… Two of North America’s most challenging race tracks will face BMW Team RLL on back-to-back weekends as the second half of the 2017 IMSA WeatherTech Championship begins. With both events providing bookends to the July 4th holiday – the Sahlen’s Six Hours of the Glen, on July 2nd, at Watkins Glen International and the Mobil 1 SportsCar Grand Prix, on July 9th, at Canadian Tire Motorsport Park – BMW Team RLL has liveried both BMW M6 GTLM racing cars in a special holiday fireworks theme.

BMW Team RLL has used the traditional Le Mans break in the schedule to continue testing and continue the improvement the team has made with the M6 GTLM. A pole and a double podium finish in the last round at the Circuit of the Americas was a season’s-best result.

“As we saw at COTA, this car seems to like long, fast circuits with fast corners and certainly Watkins Glen is all that”, said Bobby Rahal, Team Principal. “I’m optimistic about our pace and not just in qualifying, also the race. I like six hour races. I think all of the races should be six hours at least. I think that is a great distance. Depending on the track, that’s around 600 miles, maybe a little bit more. And particularly Watkins Glen is historic for six hour races so I’m excited about going there. After Austin we have to feel optimistic about where we are, performance wise. It’s just a matter of not making mistakes. I think we can be right in the thick of it.

He continued with a comment on the next race at CTMP, “We have always had reasonably good results in qualifying but in the races have somewhat fallen off a bit but I don’t think that is going to be as much of an issue this year given our performance. Like at COTA and Watkins Glen, the car likes fast corners and I think there are only two — at most — slow corners on the whole track. I think the nature of the track is in our wheel house and assuming things remain the same we should be competitive. Elkhart Lake is coming up too and these are tracks that probably now fit the BMW M6 very well so we are optimistic.”

Bill Auberlen, driver No. 25 BMW M6 GTLM: “We did a fair amount of testing before COTA and had a positive BoP change. When the green flag dropped we were looking much better. We finished P2 and I’m hoping we are starting our roll for the bid to win the championship. Heading to Watkins glen, Mosport (CTMP), and Road America hopefully benefit the BMW M6 GTLM. We are very close in the championship points so all we need to do now is stand on the podium consistently.”

Alexander Sims, driver No. 25 BMW M6 GTLM: “This year is getting better and better for us in the 25 car so I am really looking forward to going to a Watkins Glen and then Mosport. Watkins Glen should suit the BMW and the test we did a month or so ago went well, what a place it is to drive! Mosport will be new for me so I will just keep an open view and see how the weekend goes to do the very best job I can.”

John Edwards, driver No. 24 BMW M6 GTLM: “It’s been a long break from racing in GTLM so we are all eager to get back to business! Last year we had good speed at Watkins Glen and Mosport as these high speed tracks really focus on the strong points of our M6. This year, we’ve been far more competitive at tracks where we had struggled with the car last year, including a double podium at our last race at COTA. I am confident we can carry that momentum into the back-to-back weekends at two of the fastest tracks we race.”

Martin Tomczyk, driver No. 24 BMW M6 GTLM: “So far Watkins Glen is one of my favorite race tracks in the States. We went testing and it felt very promising for the upcoming race. The track layout fits our M6 nicely. You never know what will happen in the race, but we should be competitive. I’ve never been to Mosport (CTMP) and I will have to adapt quickly. With just one week in between the races it will be tough for the team and drivers.”

BMW of North America, LLC has been present in the United States since 1975. Rolls-Royce Motor Cars NA, LLC began distributing vehicles in 2003. The BMW Group in the United States has grown to include marketing, sales, and financial service organizations for the BMW brand of motor vehicles, including motorcycles, the MINI brand, and the Rolls-Royce brand of Motor Cars; DesignworksUSA, a strategic design consultancy in California; a technology office in Silicon Valley and various other operations throughout the country. BMW Manufacturing Co., LLC in South Carolina is part of BMW Group’s global manufacturing network and is the exclusive manufacturing plant for all X5 and X3 Sports Activity Vehicles and X6 and X4 Sports Activity Coupes. The BMW Group sales organization is represented in the U.S. through networks of 342 BMW passenger car and BMW Sports Activity Vehicle centers, 152 BMW motorcycle retailers, 127 MINI passenger car dealers, and 36 Rolls-Royce Motor Car dealers. BMW (US) Holding Corp., the BMW Group’s sales headquarters for North America, is located in Woodcliff Lake, New Jersey.