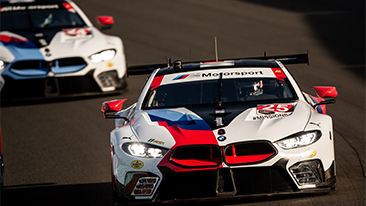 Woodcliff Lake, N.J. – September 11, 2019… BMW Team RLL has an enviable record at Laguna Seca Raceway. A 1-2 BMW Z4 GTLM finish in 2015, forty years and two days after Hans J. Stuck won there in 1975 in a BMW 3.0 CSL, began the recent string of successes; a win in 2017 for the No. 24 BMW M6 GTLM driven by John Edwards and Martin Tomczyk and again in 2018 for the No. 25 BMW M8 GTE, piloted by Connor De Phillippi and Alexander Sims BMW. The team is eagerly looking toward its return to the beautiful 2.238-mile, 11-turn circuit, located amongst the vineyards of the Salinas Valley and a short distance from California’s scenic Monterey Bay. The goal for the drivers, crew and engineers of BMW Team RLL at this weekend’s IMSA Monterey Sportscar Championship race is nothing short of another win to add to the emotional season-opening victory in the Rolex 24 At Daytona.

This weekend’s race will see a change of liveries for the first time this season. While the No. 25 BMW M8 GTE, of Connor De Phillippi and Tom Blomqvist, will remain in the traditional BMW Motorsport white the No. 24 BMW M8 GTE, of John Edwards and Jesse Krohn, will race in an all-black livery continuing the tradition begun in 2017.
BMW Team RLL drivers stand sixth (De Phillippi), seventh (Edwards, Krohn) and ninth (Blomqvist) in GTLM driver points standings.

The penultimate round of the 2019 IMSA WeatherTech SportsCar Championship will take place this Sunday, Sept. 15, and will be broadcast on NBC beginning at 3:00 p.m. ET. Follow us on Twitter @BMWUSARacing for news from the pit box and get live scoring and in-car camera views at IMSA.com.

“I believe we should feel good anytime BMW Team RLL heads to Laguna Seca,” said Bobby Rahal, Team Principal. “We have won three times in the previous four years. A good strategy and the ability to get through traffic – more than who has the fastest car is usually key to success.”

Tom Blomqvist, driver No. 25 BMW M8 GTE: “Laguna Seca is one of those tracks that you grow up as a kid knowing about. It’s synonymous with racing in the U.S. and has one of the most famous corners in racing. Again, it’s new to me, but I’m excited to drive around there. Hopefully, we can bounce back from a difficult weekend in VIR with a positive showing here at Laguna. It’s been a tough year for everyone but were all committed to end the season on a high note!”

Connor DePhillippi, driver No. 25 BMW M8 GTE: “Laguna Seca is one of the iconic highlights of the calendar each year and one of the most interesting events from a strategic point of view. I’m looking forward to catching some air at the corkscrew and getting our M8 GTE back on the podium where it deserves to be.”

John Edwards, driver No. 24 BMW M8 GTE: “We’re back in black and hopefully will have a little more luck on our side! Laguna Seca seems to treat me either extremely well or extremely poorly, never in between! I’ve won championships there in formula cars and the GTLM race in 2015 and 2017, but equally have shown up with no pace and no results in other years. After some bad luck there last year, hopefully it’s time to turn around again and Jesse and I can get back the podium.”

Jesse Krohn, driver No. 24 BMW M8 GTE: “Laguna Seca is one of my favorite places to go in the US. Last season, we had a good weekend there, with a win for Connor and Alex and fourth place finish for John and me. I don’t see any reason we should not expect a similar performance.”