The Exclusive North American Premiere of the BMW i8 MemphisStyle at Frieze Art Fair New York. 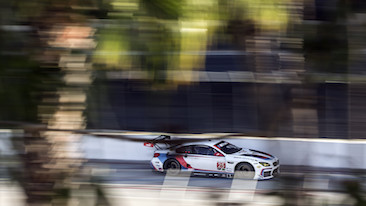 Woodcliff Lake, N.J. – May 2, 2017… A change in the 2017 IMSA WeatherTech SportsCar Championship schedule will see BMW Team RLL race at the Circuit of the Americas, in Austin, Texas on May 6 instead of the series’ usual September date. The two-hour-and-forty-minute Advance Auto Parts SportsCar Showdown will see the team racing with renewed momentum after a strong effort at Long Beach where both BMW M6 GTLM cars showed increased competitiveness and season’s-best fourth and seventh place finishes.

The team tested at the 3.4-mile, 20-turn COTA for one day during the week following the Long Beach race with all four regular season drivers present, Bill Auberlen and Alexander Sims co-driving the No. 25 M6 and John Edwards and Martin Tomczyk co-driving the No. 24 M6. Most recently Edwards, Sims and Tomczyk were among BMW drivers spread across nine BMW M6 GT3 racing cars at the April 23rd six-hour qualification race for the Nurburgring 24-Hour race. All three BMW Team RLL drivers will compete in the 45th annual Nurburgring 24 event on May 27-28.

The Circuit of the Americas has seen BMW Team RLL finish on the podium twice, including a victory by Bill Auberlen and Dirk Werner in a BMW Z4 GTLM in 2015. In the first season of the Z4 GTLM program, John Edwards and Dirk Müller, finished third in 2013.

“We have had some success at COTA over the years. In 2015 we won with the Z4 GTLM because of great race strategy”, said Bobby Rahal, Team Principal. “Because of the long straightaway, it is a track that is not necessarily to our advantage. We had a reasonably good car at Long Beach – we should have won the race – so I think our pace is much more in line with the other cars and there is reason to be optimistic. We just have to make sure our strategy is right, the car is handling well, and we make no mistakes.”

Bill Auberlen, driver No. 25 BMW M6 GTLM: “COTA is a track where we’ve seen success in the past and will provide a good test for the improved performance of the M6 GTLM we saw at Long Beach. The long straights and high speed, sweeping turns of COTA will give us a much better understanding of where we stand among the competition.”

Alexander Sims, driver No. 25 BMW M6 GTLM: “I am really looking forward to racing at COTA. I have tested there before – once last year and just recently and I enjoyed. To race there will be cool. We have continued to work on the car and I feel we should be competitive again after our improved Long Beach showing.”

John Edwards, driver No. 24 BMW M6 GTLM: “The final minutes of the race were disappointing at Long Beach, but we take away some positives. We were leading and competing for the win before the power failure. Our aim is to take that competitiveness into the next round at COTA and rebound from the difficult start we’ve had to the season. I’m looking forward to returning the podium with BMW.”

Martin Tomczyk, driver No. 24 BMW M6 GTLM: – “We went testing at COTA right after Long Beach and it was great for me. It helped me erase the disappointment of that race and turn my focus to the next race. It was great to drive the circuit for the first time. Once again our goal is to have a clean race and finish within the front runners.”

BMW Group in America
BMW of North America, LLC has been present in the United States since 1975. Rolls-Royce Motor Cars NA, LLC began distributing vehicles in 2003. The BMW Group in the United States has grown to include marketing, sales, and financial service organizations for the BMW brand of motor vehicles, including motorcycles, the MINI brand, and the Rolls-Royce brand of Motor Cars; DesignworksUSA, a strategic design consultancy in California; a technology office in Silicon Valley and various other operations throughout the country. BMW Manufacturing Co., LLC in South Carolina is part of BMW Group’s global manufacturing network and is the exclusive manufacturing plant for all X5 and X3 Sports Activity Vehicles and X6 and X4 Sports Activity Coupes. The BMW Group sales organization is represented in the U.S. through networks of 341 BMW passenger car and BMW Sports Activity Vehicle centers, 152 BMW motorcycle retailers, 127 MINI passenger car dealers, and 36 Rolls-Royce Motor Car dealers. BMW (US) Holding Corp., the BMW Group’s sales headquarters for North America, is located in Woodcliff Lake, New Jersey.