Statement and Presentation by Harald Krüger, Chairman of the Board of Management of BMW AG, Annual Accounts Press Conference 2017 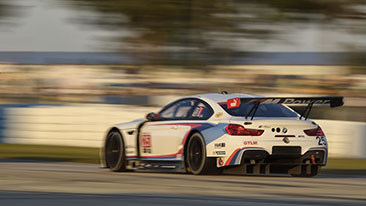 Woodcliff Lake, N.J. – April 3, 2017… The Long Beach, California street circuit has been the site of many BMW Team RLL successes since the team’s first season racing for BMW in 2009. The team has finished the IMSA WeatherTech SportsCar Championship race, for a second consecutive year sponsored by BUBBA® burger, with at least one BMW on the podium every year except last season. The Bobby Rahal-led team has won the street race three times; once with the BMW M3 GT in 2011 and twice with the BMW Z4 GTLM, in 2013 and 2015. Last year, Bill Auberlen qualified the new M6 GTLM racer on the class pole position, but finished a disappointing fifth after multiple contact with competitors ended another podium opportunity.

The Long Beach street course is only 1.968 miles long and the race is the shortest of the season at 100 minutes. Far different than the season’s opening 24 Hours of Daytona and 12 Hours of Sebring endurance events, success is often dictated by how the caution periods fall and how a team executes the race’s one planned pit stop and driver change.

To date in 2017, the team has scored a season’s best sixth place finish at the 12 Hours of Sebring. At Long Beach, season-long drivers Bill Auberlen and Alexander Sims will be in the No. 25 M6 and John Edwards and Martin Tomczyk will pilot the No. 24 M6.

The GTLM class Balance of Performance was adjusted by IMSA following Sebring and the M6 GTLM will benefit from an increase in boost in the rev range from 2000 to 7250 rpm. The fuel tank volume was also increased by 3 liters to total 108 liters of E20 fuel.

“It’s been a challenging year,” said Bobby Rahal, Team Principal. “However, if you look back at how we did at Long Beach last year – being on pole with Bill, with the car in its third race at that stage, the race was very positive for us. I would like to think that we can repeat that performance this year. It’s a very big car and of course it’s a very narrow track so that gives our drivers an extra challenge. If you look at our history at Long Beach, we’ve been pretty successful with BMW Team RLL having won three times and earned a number of podiums beyond that so we go there with a positive outlook based on past performance from both BMW and the team.”

Bill Auberlen, driver No. 25 BMW M6 GTLM: “Long Beach is the highlight sprint race of the year. I always look forward to the weekend for two primary reasons. First, it’s my home track and, secondly, I’ve won twice in the last few years. Last year, I qualified on the pole, setting a new lap record in the BMW M6 GTLM. This year I hope for a repeat of that, but also to be standing on the top step of the podium at the end of the race.”

Alexander Sims, driver No. 25 BMW M6 GTLM: “I am thoroughly looking forward to the Long Beach weekend. It will be my first time there and having watched the onboard videos, the circuit looks to be a brilliant challenge. I’ve been enjoying working with the team and am just looking forward to getting to Long Beach and trying to exploit all we can from our M6 GTLM.”

John Edwards, driver No. 24 BMW M6 GTLM: “I always enjoy racing at Long Beach because it’s the only street circuit we go to in the GTLM season. The walls are closer and consequences are higher, but we can feel the fan support more on a street circuit, even as we walk to pit lane to get ready for every session. I’m also looking forward to the first sprint race of the season, as the intensity is higher and mistakes are more costly when we only have one pit stop in a 100 minute race.”

Martin Tomczyk, driver No. 24 BMW M6 GTLM: “It is always exciting to race on a street circuit. Long Beach will be my first in the States. I know the nine hour time difference between my home in Germany and California will not make it easy, but I am up for the challenge. After two disappointing races at Daytona and Sebring we are ready to prove the performance of our M6.”