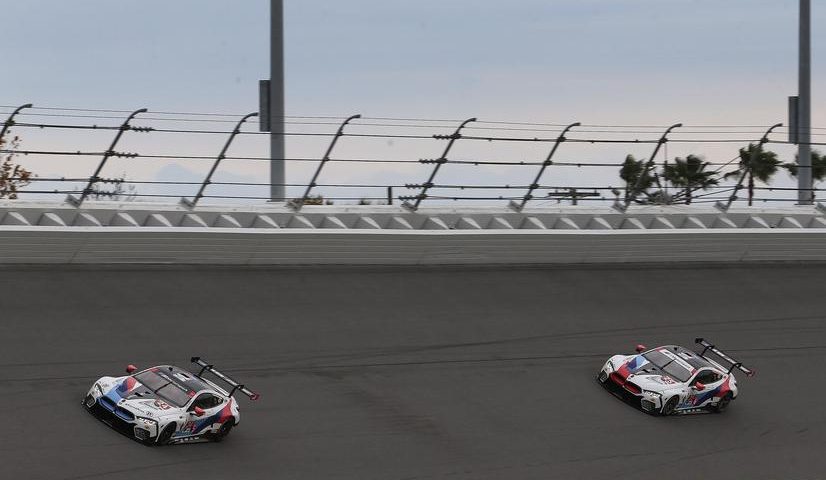 On Friday 15th March, BMW Team MTEK will contest the WEC “1000 Miles of Sebring” with its pair of BMW M8 GTEs. The #81 BMW M8 GTE regular drivers, Nick Catsburg (NED) and Martin Tomczyk (GER), will be supported by Alexander Sims (GBR). Augusto Farfus (BRA) and António Félix da Costa (POR) share duties in the #82 sister car with BMW DTM driver Bruno Spengler (CAN), who will debut in WEC. It will be the first time that the Munich-based outfit will race in the USA, but after achieving over 2,300 kilometres of testing at the weekend the team is feeling prepared.

On Saturday, BMW Team RLL, which won the GTLM class in January’s IMSA season-opening prestigious 24-hour race of Daytona (USA), will contest the IMSA Sebring 12 Hours. After finishing the race second in 2018 on the BMW M8 GTE’s second outing, the team is aiming for the top-spot this year. The Daytona winning #25 BMW M8 GTE will be driven by Tom Blomqvist (GBR), Connor De Phillippi (USA) and Colton Herta (USA). Their team-mates Jesse Krohn (FIN) and John Edwards (USA) will share duties with BMW DTM driver Philipp Eng (AUT) in the #24 sister car.

In the 12-hour endurance race GTD class, Turner Motorsport will return to Sebring with its BMW M6 GT3. The team will also field a BMW M4 GT4 in the Michelin Pilot Challenge, with Bill Auberlen (USA) doing double-honours and driving in both. BimmerWorld Racing and Stephen Cameron Racing will also compete in this series with their BMW M4 GT4s.

Comments ahead of the “BMW M Motorsport Super Weekend” at Sebring.

Jens Marquardt (BMW Motorsport Director):
“It’s a big weekend for BMW M Motorsport and, in particular, the BMW M8 GTE. Since we launched it at the start of last year, both BMW Team RLL and BMW Team MTEK have had great podium results, including the victory at Daytona and a second-place finish at Sebring last year. To see four BMW M8 GTEs compete in two events across two days is a unique opportunity and we’re looking forward to taking on the challenge. The BMW M6 GT3 and the BMW M4 GT4s complete the big BMW array at Sebring. This weekend will be a great BMW family meeting at a venue that plays a very special role in BMW Motorsport history as we all remember the fantastic Sebring overall wins with the BMW 3.0 CSL in its debut season 1975 and with the BMW V12 LMR exactly 20 years ago in 1999.”

Ernest Knoors (Team Principal, BMW Team MTEK):
“In terms of preparation, we are pretty happy. We had a very good test and covered over 2,300 kilometres with both cars. It was very productive in terms of getting to know the car on this track which is still a special track for us because we have never been here before. In general, we are happy to be back on track as it was a long break after Shanghai. Our BMW M8 GTE seems to work quite well here at Sebring. We are also working well together with BMW Team RLL and trying to learn as much as we can in a short amount of time to get the car set up properly. Now we are looking forward to a good race. It’s always nice to be at a venue like Sebring with a lot of history and a very special track in terms of layout and bumps and quite a hard challenge, but the whole team is motivated and looking forward to it.”

Bobby Rahal (Team Principal, BMW Team RLL):
“Sebring is a whole different story (to other endurance races such as Daytona) but we have always had a pretty good car there regardless of which chassis we were running. We have won there before which, to me, is equally satisfying as winning Daytona given the difficulties of the circuit and the challenges the circuit presents the teams with. That’s not to diminish Daytona because anytime you win a 24-hour race, it’s something really special. I think we have a good opportunity to do well in Sebring. It’s interesting that with the WEC race the previous day, we may be able to learn some things from those guys based on what happens in their race, and hopefully it’s a good one for them. I always look forward to Sebring because it’s always such a fabulous and historic event. For me personally, it has so much meaning. I think we have a good chance and of course we have a good line-up of drivers.”

Martin Tomczyk (WEC #81 BMW M8 GTE):
“It’s so great to come back to Sebring after I raced here in IMSA in 2017, and now to come back with for the WEC ‘1000 Miles of Sebring’ is very exciting. It’s a special track – the oldest in Florida – and a favourite with every driver. It’s going to be a challenging event with both championships running side-by-side but I’m looking forward to being a part of it and showing what the BMW M8 GTE can do.”

Nick Catsburg (WEC #81 BMW M8 GTE):
“Sebring is incredibly bumpy and there are still concrete areas in some places, which means it is tough on the cars and the tyres. We always say that if you can survive an endurance race here, you can survive anywhere. The BMW M8 GTE finished the 12-hour race here in second place last year so we know it can go the distance. I look forward to the inaugural 1000-mile race and hope we can repeat its success.”

Alexander Sims (WEC #81 BMW M8 GTE):
“I am really excited to go back to the BMW M8 GTE. I got to know the car very well last year, driving it in the full IMSA season and at Le Mans. It is great doing Formula E but at the same time I am looking forward to getting back to the BMW M8 GTE and the historic, bumpy Sebring circuit. I have some good memories from the last two years there.”

António Félix da Costa (WEC #82 BMW M8 GTE):
“I am really looking forward to Sebring. Our last time out with the BMW M8 GTE was at Shanghai, which wasn’t a strong one, but we came out of Fuji with a podium and a really strong qualifying, so I am really looking forward to getting back to it. I actually missed the car, the team and the series a lot and it’s a great thing that BMW enables us to race in both the WEC and Formula E so I can really balance things out. Sebring looks like a really challenging track. It will be my first time there, but I have really good team-mates who know the track well and we have BMW Team RLL there as well in IMSA – these guys drive this track a lot and I am sure they can help me.”

Augusto Farfus (WEC #82 BMW M8 GTE):
“Sebring is an incredible track. It has a good mix of slow and medium speed corners, and then the last corner that is very special. It’s one of the bumpiest tracks in the world and is a legendary track where many of the greats have won. I hope that we can do that this weekend with the BMW M8 GTE.”

Bruno Spengler (WEC #82 BMW M8 GTE):
“I’m really looking forward to my WEC debut and my first appearance in the BMW M8 GTE. Sebring is a track I like very much. I drove here in 2016 in the IMSA series and that time we took second place in the 12-hour race. I am looking forward to the challenge and to starting with Augusto and António as well as with BMW Team MTEK, which I raced with in DTM.”

Jesse Krohn (IMSA #24 BMW M8 GTE):
“Sebring is one of the toughest races of the season. It’s really a challenge for the car and for the drivers, although its ‘only’ 12 hours. It’s the same as a 24-hour race on any other track. Last year was really good for us even if we weren’t quite there with the car development at that time. This year, we are miles ahead, so I am really looking forward to seeing what we can do this year with those big steps we have made with the car since last year. It should be a really good event for us, and I hope for a strong result.”

John Edwards (IMSA #24 BMW M8 GTE):
“We had a good test at Sebring, and I feel we are ready. In the last four IMSA races (2018 and 2019) we have won three times and finished third-twice so with the combination of the momentum the team has and the progress we’ve made with the BMW M8 GTE I believe we can continue our winning ways.”

Philipp Eng (IMSA #24 BMW M8 GTE):
“I’m really looking forward to my first start at Sebring. I practiced a lot of laps in the simulator and now I can’t wait to compete there. Our Daytona victory of course gives great extra momentum for Sebring. I hope we can repeat this fantastic success.”

Tom Blomqvist (IMSA #25 BMW M8 GTE):
“Sebring is quite a challenging track – especially the first and last corners, which are very high-speed and very bumpy. I must admit though, that even after only one day of testing, I am quite enjoying it. The team had a great result at Daytona this year and finished second here at Sebring last year, so I look forward to contributing to another good finish.”

Connor De Phillippi (IMSA #25 BMW M8 GTE):
“We scored the first podium for the BMW M8 GTE program at Sebring last year, so we have shown what we are capable of. With our strong finish to the 2018 season and the Daytona win this year we are aiming for nothing short of a podium – if not the win. For me the 24-hour win was really special because it was my first major endurance racing victory with BMW and that it was also the first big race and win my family was able attend.”

Colton Herta (IMSA #25 BMW M8 GTE):
“Winning the Daytona 24 hours in my first race with BMW Team RLL was certainly a confidence boost. The test went well, but I know it will be very different when there are many more cars on the track. Like Daytona, we race into the night, but unlike Daytona the circuit is not covered by the Speedway lights. Driving with only the headlights will be new for me, but these are the challenges I like.”