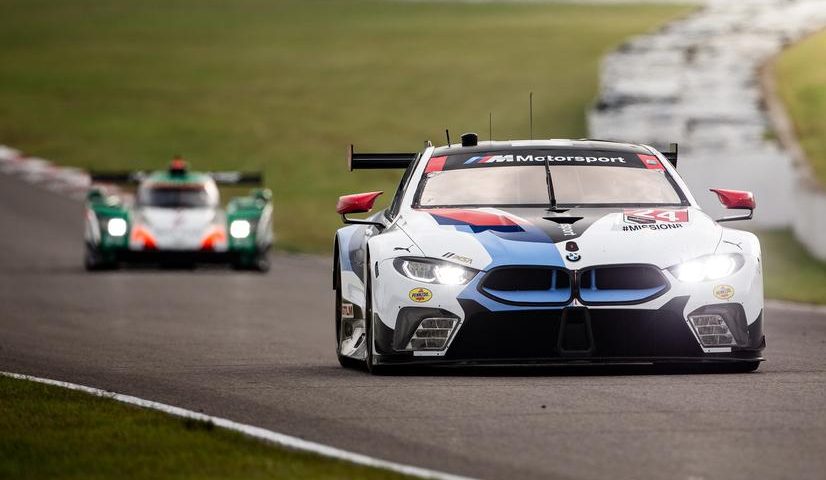 Woodcliff Lake, N.J. – July 6, 2019… Jesse Krohn scored his first pole position for BMW Team RLL to lead a GTLM class front row lock out in today’s qualifying session for tomorrow’s two-hour-and-forty-minute Mobil 1 Sportscar Grand Prix presented by Acura at the Canadian Tire Motorsport Park, in Bowmanville, Ontario, Canada. With a 1:13.086 minute lap around the 2.459-mile, 10-turn circuit and a new GTLM qualifying record, the Flying Finn drove the No. 24 BMW M8 GTE .468 seconds clear of the GTLM field and his teammate Tom Blomqvist. Krohn will share the No. 24 BMW M8 GTE tomorrow with John Edwards. Blomqvist, in his first weekend at CTMP, qualified second with a 1:13.548 minute lap in the No. 25 BMW M8 GTE. He will co-drive with Connor De Phillippi tomorrow.

Today’s result was the third pole for the BMW M8 GTE program (Sebring, Mid-Ohio – 2018), the 26th from the beginning of BMW Team RLL in 2009, as well as a sweet reward for the BMW Team RLL crew members who have worked more than they have slept since the Watkins Glen race only one week ago.

“Obviously that was a good session for us,” said Brandon Fry, RLL Technical Director. “We expected to go quicker than last year, but we also expected everybody to go quicker as well. Today was fairly cool and good for the M8. Even though it’s only a two-hour-and-forty-minute race, it’s going to be tough on the tires. We’ll have to get everything right if we expect to stay up front tomorrow.”

The green flag for the Mobil 1 Sportscar Grand Prix presented by Acura waves at 1:05 p.m. ET tomorrow with the live NBC broadcast beginning at 1:00 p.m. ET. Follow us on Twitter @BMWUSARacing for news from the pit box and get live scoring and in-car camera views at IMSA.com.

Jesse Krohn, driver No. 24 BMW M8 GTE (P1): “It’s super cool to have my first pole in IMSA GTLM. I’ve waited for this for a long time and finally, it’s here. The guys gave me a great BMW today. They did an amazing job with the setup and that made it really easy to put this M8 on pole.”

Tom Blomqvist, driver No. 25 BMW M8 GTE (P2): “The No. 25 M8 was quick today. The guys have worked really hard this week and weekend after Watkins Glen and last night. I really need to thank the team. Credit to the boys after putting in so many long hours recently. We can field both cars on the front row tomorrow thanks to them. But qualifying isn’t even half the job in this championship so we have a long way to go.”

Robby Foley, driver No. 96 BMW M6 GT3 (P1): “Qualifying was awesome. The Turner Motorsport guys gave me a great car today. We made the right changes over the practice sessions to prepare. We did a qualifying simulation in the morning and learned a lot about the new tires which we applied to qualifying today. Hopefully we can convert a pole into a win tomorrow.”

BMW Group In America
BMW of North America, LLC has been present in the United States since 1975.  Rolls-Royce Motor Cars NA, LLC began distributing vehicles in 2003.  The BMW Group in the United States has grown to include marketing, sales, and financial service organizations for the BMW brand of motor vehicles, including motorcycles, the MINI brand, and Rolls-Royce Motor Cars; Designworks, a strategic design consultancy based in California; technology offices in Silicon Valley and Chicago, and various other operations throughout the country.  BMW Manufacturing Co., LLC in South Carolina is the BMW Group global center of competence for BMW X models and manufactures the X3, X4, X5, and X6 Sports Activity Vehicles. The BMW Group sales organization is represented in the U.S. through networks of 347 BMW passenger car and BMW Sports Activity Vehicle centers, 153 BMW motorcycle retailers, 127 MINI passenger car dealers, and 36 Rolls-Royce Motor Car dealers.  BMW (US) Holding Corp., the BMW Group’s sales headquarters for North America, is located in Woodcliff Lake, New Jersey.