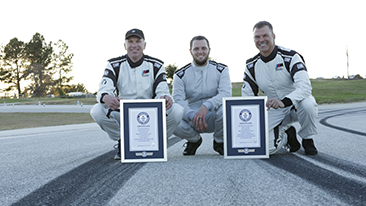 Schwartz broke the GUINNESS WORLD RECORDS title for Longest continuous vehicle drift on May 11, 2013 when he drifted an unmodified 2013 BMW M5 sedan for 51.278 miles also at the BMW Performance Center in Greer, SC. Since then, Schwartz’s record was broken twice – officially in 2013, then 2014.

“We knew going-in that if we were going to recapture the world record for longest sustained drift and set the bar as high as possible, we would need to find a way to keep the M5 going without stopping to refuel,” said Schwartz. “In the end, the refueling system worked flawlessly and the M5 performed as expected. It was a big win all around.”

Although the refueling system was built with the most technologically advanced components on the market, a human touch was needed to make and hold the refuel connection.

Five separate times over the course of the eight hour drift, a second BMW M5 — a previous generation M5 (F10) similar to the one that Schwartz used to set his original record — entered the skid pad driven by BMW Performance Center Chief Driving Instructor Matt Mullins. As Mullins matched Schwartz’s drift, Detroit Speed’s Matt Butts, who was suspended via a safety tether from the second vehicle’s rear window, was able to straddle the space between both moving vehicles and successfully complete the fueling.

“Although we practiced the refueling several times before the GUINNESS WORLD RECORDS title attempt, there was very little margin for error,” said Butts. “We’re excited to have played a part in Johan and BMW recapturing this record.”

During the Consumer Electronics Show this week, Schwartz and Mullins will perform a drifting demonstration in the 2018 BMW M5 at the top of every hour. The GUINNESS WORLD RECORDS title-setting vehicle will be displayed in the BMW Experience at the Las Vegas Convention Center’s Silver Lot.