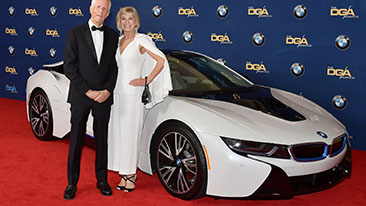 BEVERLY HILLS, CA - FEBRUARY 03: Honoree Michael Apted (L) and Paige Apted arrive in a BMW to the 70th Annual Directors Guild of America Awards at at The Beverly Hilton Hotel on February 3, 2018 in Beverly Hills, California. (Photo by Stefanie Keenan/Getty Images for BMW)

The BMW M760i, BMW i8 and ALPINA B6 were showcased alongside Hollywood’s biggest stars.

“BMW has a long tradition of supporting creative visionaries across artistic disciplines,” said Uwe Dreher, Head of Brand Communication BMW. “We are proud to once again partner with the Directors Guild of America to honor some of Hollywood’s most exciting storytellers.”

Comedian Judd Apatow hosted the ceremony which was attended by some of the biggest names in Hollywood, including Kevin Bacon, Sam Rockwell, Greta Gerwig, Saoirse Ronan, Justin Peele, Amy Schumer, and Sally Hawkins.

Director and former DGA President Michael Apted (The World Is Not Enough, The Chronicles of Narnia: The Voyage of the Dawn Treader) was the recipient of the DGA Honorary Life Member Award in recognition of leadership in the industry, contribution to the Guild and the profession of directing, and outstanding career achievement, presented to him by DGA President Thomas Schlamme and Former National Executive Director Jay D. Roth.

Guillermo del Toro took home the evening’s most coveted prize of the Directors Guild of America; the Award for Outstanding Directorial Achievement in Feature Film for 2017 for the film The Shape of Water, which was presented to him by last year’s winner Damien Chazelle (La La Land).

BMW’s support of the Directors Guild of America is part of the company’s ongoing commitment to arts, entertainment and culture. BMW vehicles have a long been featured on the big screen, including in iconic films like Mission: Impossible and the James Bond franchises.

The DGA Award for Outstanding Directorial Achievement in Feature Film has traditionally been a near-perfect barometer for the Best Director Academy Award. Only seven times since the DGA Award’s inception has the DGA Award winner not won the same year’s Academy Award®.

Journalist note: Information about BMW and its products in the USA is available to journalists online at www.bmwusanews.com and www.press.bmwna.com.

Directors Guild of America (DGA)
In the 82 years since its founding in 1936, the DGA has fought for the economic and creative rights of its members; protected their ability to financially benefit from the reuse of their work; established strong pension and health plans; and established jurisdiction in new technologies and distribution platforms. Today the Guild represents more than 17,000 directors and members of the directorial team working in film, television, commercials, new media and other audiovisual media.