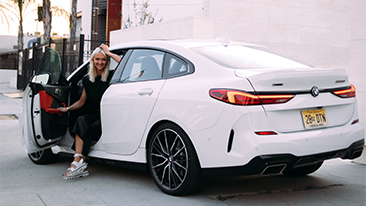 Woodcliff Lake, NJ – February 4, 2020… BMW of North America returns as the Official Automotive Partner of New York Fashion Week (NYFW): The Shows for the 2020 season to celebrate the road less traveled, highlighting inspiring voices in fashion and culture who are driving change and pushing boundaries. In its second year of a partnership with IMG, NYFW: The Shows’ owner and lead producer, BMW will present a digital content series highlighting four fashion industry notables and the unconventional paths that led to their success, and host engaging experiences on site throughout the event.

“BMW’s presence at NYFW: The Shows stems from our company’s longstanding support of the arts and culture, along with a strong belief in individual expression and creativity,” said Uwe Dreher, vice president of marketing, BMW of North America. “We are proud to celebrate and partner with those who are driving powerful conversations and inspiring others with their unique stories.”

Each designer will be accompanied on their journey by the first-ever BMW 2 Series Gran Coupe, the brand’s newest expression of pure BMW at the entry point of the premium market. The BMW 2 Series Gran Coupe’s starring role in the series showcases BMW’s empowerment of discerning individualists that strive to make a unique lifestyle statement, just like those featured in the content.