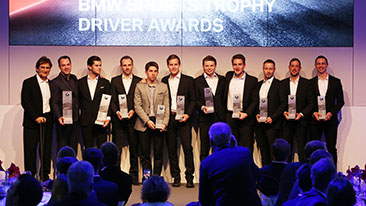 Munich, Germany- December 15, 2017… BMW Motorsport celebrated its traditional Season Review at BMW Group Classic in Munich (GER), where the most successful drivers and teams in the 56th staging of the BMW Sports Trophy were honoured. Victory in this year’s Drivers’ Competition went to Ricardo van der Ende and Max Koebolt of the Netherlands. In the Team Competition, Pixum Team Adrenalin Motorsport proved unbeatable for the fourth year in a row. The event also saw BMW Motorsport recognise the achievements of Bill Auberlen (USA), who was presented with the Honorary Award after making 400 starts in BMW race cars.

BMW Group Classic provided the impressive backdrop as more than 200 guests looked back at the highlights of this season’s BMW Motorsport works programme. These included the first DTM victory at the Norisring (GER) for 25 years, courtesy of Bruno Spengler (CAN), the “Pool Fishing” social media hit from BMW Team RMG and Timo Glock (GER), first place for BMW Team RLL at “Petit Le Mans” at Road Atlanta (USA), and the appearances of this year’s two BMW Art Cars at Daytona (USA) and Macau (CHN).

The stage then belonged to the private teams and drivers, whose commitment once again made them excellent global ambassadors for the BMW brand in 2017. The best of those in the Drivers’ and Team Competitions were presented with their trophies. The 25 most successful drivers and top ten teams shared a total prize purse of 350,000 euros.

“Even in its 56th year, the response to our BMW Sports Trophy is still impressive,” said BMW Motorsport Director Jens Marquardt. “This time, more than 700 drivers and almost 150 teams scored points towards the BMW Sports Trophy classifications. We once again recorded thousands of individual results. Customer racing is, and will remain, one of the central pillars of our motorsport programme. It was fantastic to have the most successful private drivers and teams here in Munich again, and to be able to recognise their achievements. Congratulations to Max Koebolt, Ricardo van der Ende and Pixum Team Adrenalin Motorsport.”

In the Drivers’ Competition, van der Ende and Koebolt of the Ekris Motorsport team claimed first place. They won the title in the GT4 European Series and scored 680 points in the BMW Sports Trophy. The duo each receives a winner’s cheque for 27,500 euros. Third place was shared by Christopher Rink, Philipp Leisen and Danny Brink (all GER). They each receive 18,500 euros in prize money.

Koebolt said: “It was an amazing season. I never expected such a result in the end. Last year I competed with BMW for the first time, and was quite unlucky. To stand on top of the BMW Sports Trophy competition now and to have prevailed against all the other strong drivers is just a great feeling.”

Van der Ende added: “This just feels sweet. We had a magnificent season. Out of 18 races we were on the podium a total of 15 times. We are proud to stand in front of this amazing audience as winners now. Every season has its highs and lows, but this year we managed to claim two titles in the European GT4 Series. This is just unique.”

In the Team Competition, Pixum Team Adrenalin Motorsport continued its impressive run, scoring 819 points to win for the fourth time in a row. Matthias Unger’s (GER) team has been a regular at the Nürburgring-Nordschleife (GER) for many years, and regularly wins races there. 30,000 euros in prize money was awarded to the most successful team. Securtal Sorg Rennsport and BMW Team Teo Martín followed in second and third. They received 20,000 euros and 15,000 euros respectively.

“It was very tight this year,” said Unger. “Right up until the end it was far from clear if we could make it again. Our rivals suffered a dose of bad luck; we were fortunate. We never gave up – and that paid off.”

Auberlen receives BMW Motorsport Honorary Award.
Future BMW of North America Brand Ambassador, Bill Auberlen, received a special honour. He has now contested 400 races for BMW – more than any other active driver. He joined the BMW family in 1996 and is one of the most successful drivers in North America. Auberlen recently won the classic “Petit Le Mans” with BMW Team RLL.

“It just feels great,” commented Auberlen. “I have experienced many highlights with BMW and was able to score many wins and championships. But today I had tears in my eyes for the first time ever. It was an amazing moment that I will never forget. I’m just so grateful to have a partner like BMW.”