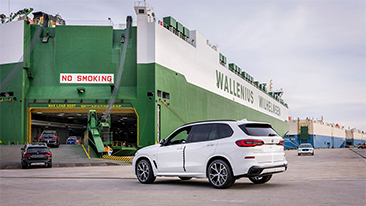 Spartanburg, S.C. – February 11, 2021… For the seventh consecutive year, BMW Manufacturing led the nation in automotive exports by value, according to data released by the U.S. Department of Commerce. BMW Manufacturing exported 218,820 Sports Activity Vehicles and Coupes during 2020 with an export value of more than $8.9 billion. The BMWs produced in Spartanburg, South Carolina, were exported through the Port of Charleston, SC (more than 189,000 units), and through five other southeastern ports: Savannah, GA; Brunswick, GA; Jacksonville, FL; Miami, FL; and Everglades, FL. More than 13,000 BMWs were also exported via rail.

“Claiming the top spot once again for U.S. automotive exports is a direct result of the commitment and dedication of the Plant Spartanburg team during the challenging 2020 production year,” said Knudt Flor, president and CEO of BMW Manufacturing. “BMW is proud to contribute to the U.S. balance of trade as we continue to be the leading manufacturer of premium vehicles for the world.”

“South Carolina’s long, successful partnership with BMW proves that the growth potential in South Carolina is limitless,” said Governor Henry McMaster. “As BMW celebrates leading the nation in automotive exports by value for the seventh straight year, we know that with our pro-business climate and elite workforce they have only scratched the surface of what they can achieve in South Carolina.”

“When BMW announced more than 28 years ago the decision to locate the company’s first North American manufacturing operations in South Carolina, it was a true game changer for the Palmetto State,” said S.C. Secretary of Commerce Bobby Hitt. “The fact that our state remains the leader in the export sales of completed passenger vehicles, particularly during a challenging year, is a reflection of the incredible commitment and partnership between BMW and South Carolina.”

“For more than 25 years, SC Ports has had a strong partnership with BMW Manufacturing,” said Jim Newsome, SC Ports President and CEO. “BMW exports 70 percent of its South Carolina-made vehicles to more than 125 countries through the Port of Charleston. We are proud to support the shipping needs of this world-class automotive company, and we look forward to continued success for BMW.”

Like all automotive manufacturers, Plant Spartanburg experienced a production interruption due to the coronavirus pandemic. After a five-week non-production period, associates returned for one shift on May 4. With new health guidelines and procedures in place, production slowly ramped up as the supply chain stabilized and customers returned in the summer.  During the last six months of the year, Plant Spartanburg produced nearly 218,000 BMWs, a record for any six-month period in the factory’s history.  All totaled, the plant produced 361,365 vehicles for the entire year 2020.

The plug-in hybrid electric variants of the plant’s two most popular vehicles set production records in 2020. The BMW X3 xDrive30e (22,964 units) and the BMW X5 xDrive45e (24,248 units) achieved all-time highs, in part, because of a 2019 expansion of the battery assembly hall.  These 47,212 electrified BMWs made up 13 percent of the plant’s total production last year. BMW has assembled batteries for electrified vehicles since 2015, making the BMW Group a pioneer of electromobility in the United States.

BMW Manufacturing currently produces about 1,500 vehicles each day, exporting more than two-thirds of its models to 125 global markets. The model portfolio includes five top-selling BMW X models, four Motorsport X models and two plug-in hybrid electric X models. The factory has a production capacity of up to 450,000 vehicles and employs more than 11,000 people.

BMW Group in America
BMW of North America, LLC has been present in the United States since 1975.  Rolls-Royce Motor Cars NA, LLC began distributing vehicles in 2003.  The BMW Group in the United States has grown to include marketing, sales, and financial service organizations for the BMW brand of motor vehicles, including motorcycles, the MINI brand, and Rolls-Royce Motor Cars; Designworks, a strategic design consultancy based in California; technology offices in Silicon Valley and Chicago, and various other operations throughout the country.  BMW Manufacturing Co., LLC in South Carolina is the BMW Group global center of competence for BMW X models and manufactures the X3, X4, X5, X6 and X7 Sports Activity Vehicles. The BMW Group sales organization is represented in the U.S. through networks of 349 BMW passenger car and BMW Sports Activity Vehicle centers, 143 BMW motorcycle retailers, 117 MINI passenger car dealers, and 38 Rolls-Royce Motor Car dealers.  BMW (US) Holding Corp., the BMW Group’s sales headquarters for North America, is located in Woodcliff Lake, New Jersey.