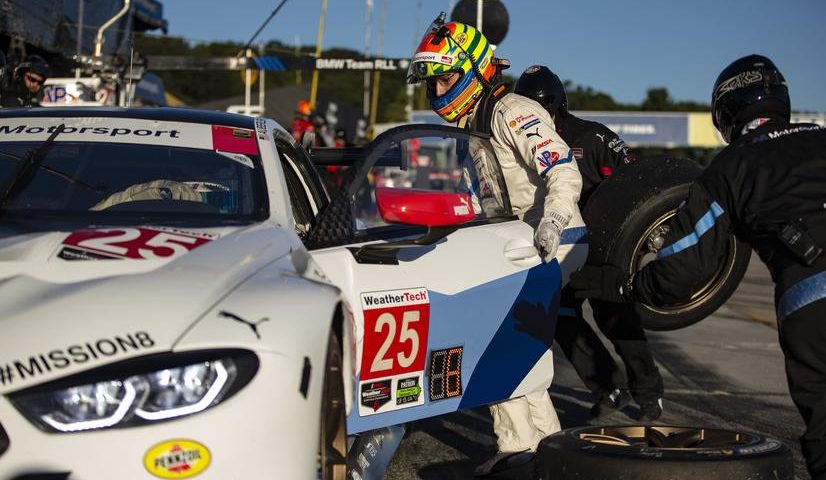 Woodcliff Lake, N.J. – Oct. 12, 2018… John Edwards will start the IMSA WeatherTech SportsCar Championship season finale, Motul Petit Le Mans, from the GTLM class pole position. Driving the No. 24 BMW M8 GTE to a 1:17.006 minute lap around the 2.54-mile, 12-turn Road Atlanta circuit, Edwards recorded his second pole of the 2018 season and will lead the 9-car GTLM class to the green flag tomorrow. Edwards will share the No. 24 machine with season-long co-driver Jesse Krohn and Australian Supercars Championship regular Chaz Mostert, who will be driving in his first race for BMW Team RLL.

Connor De Phillippi qualified the No. 25 BMW M8 GTE only .422 seconds behind his teammate (1:17.428 minutes) and will start from the seventh position, the entire GTLM class separated by a scant .768 seconds. De Phillippi and co-driver Alexander Sims have won the last two IMSA races at Virginia International Raceway and WeatherTech Raceway Laguna Seca. They will be joined by BMW ace Bill Auberlen who will be making his 410th start in a BMW racing car. Auberlen, Sims and Kuno Wittmer won last year’s Petit Le Mans race in a BMW M6 GTLM.

“A nice way to start for sure” said Bobby Rahal, Team Principal. “We tested down here earlier in the year and the test went pretty well. The GTLM class is so, so tight and this is a tough race so where we start doesn’t make the biggest difference but it’s nice to be on pole. It gives everyone a nice mindset to start the race from. I don’t know if we’re 100% happy with the car so far, but we have a good base to work from.”

John Edwards, driver No. 24 BMW M8 GTE (P1): “I definitely can’t set that kind of lap on my own, so a huge thanks to the team for giving me a solid car. I think our qualifying set up and tire choice was pretty aggressive. The M8 and I were on the edge, so I definitely had to manage that, but it was quick. I don’t think we’ll be driving like that for ten hours but during night practice we had some fast consistent long runs, so I think during the race we can settle into a nice stable car and pace. I think we’ll be pretty strong tomorrow and now it all comes down to execution.”

Connor de Phillippi, driver No. 25 BMW M8 GTE (P7): “We made some improvements heading into qualifying. I think we definitely had a car capable of being in the top-three.  I made a small mistake on my fast lap and with how tight GTLM is you can’t do that. I just need to focus and analyze that, but moving into tomorrow I know we have great race pace and we’ll give everyone heck for ten hours.”

The Motul Petit Le Mans will take the green flag at 11:05 a.m. ET tomorrow and be broadcast on a mixture of FOX Sports 1 and 2 beginning at 11:00 a.m. ET. Follow BMW Team RLL on Twitter at @BMWUSARacing for updates all weekend.

BMW Group in America
BMW of North America, LLC has been present in the United States since 1975.  Rolls-Royce Motor Cars NA, LLC began distributing vehicles in 2003.  The BMW Group in the United States has grown to include marketing, sales, and financial service organizations for the BMW brand of motor vehicles, including motorcycles, the MINI brand, and Rolls-Royce Motor Cars; Designworks, a strategic design consultancy based in California; technology offices in Silicon Valley and Chicago, and various other operations throughout the country.  BMW Manufacturing Co., LLC in South Carolina is the BMW Group global center of competence for BMW X models and manufactures the X3, X4, X5, and X6 Sports Activity Vehicles. The BMW Group sales organization is represented in the U.S. through networks of 346 BMW passenger car and BMW Sports Activity Vehicle centers, 153 BMW motorcycle retailers, 127 MINI passenger car dealers, and 36 Rolls-Royce Motor Car dealers.  BMW (US) Holding Corp., the BMW Group’s sales headquarters for North America, is located in Woodcliff Lake, New Jersey.