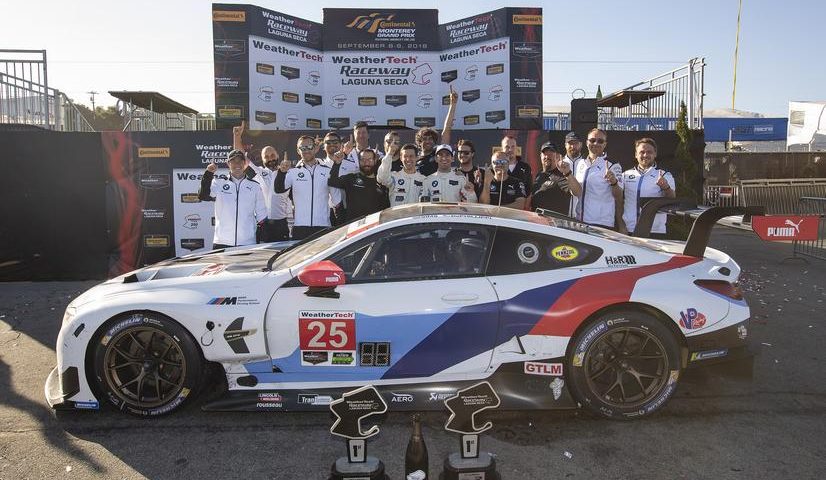 The No. 25 BMW M8 GTE, driven by Connor De Phillippi and Alexander Sims, completed 100 laps of the 2.238-mile, 11-turn Laguna Seca circuit in the two-hour-and-forty-minute race, winning with a 2.488 second margin of victory. The No. 24 BMW M8 GTE, with John Edwards and Jesse Krohn co-driving, finished fourth after having to pit from the lead in the closing minutes of the race for a splash of fuel.

The opening 45 minutes of the race was slowed by three caution periods; the first two for accidents and the third for a slowed prototype car. Starting drivers Sims and Krohn were able to avoid getting caught in any of the collisions that eliminated two class competitors and allowed both BMWs to move up two class positions. Quick thinking to pit the No. 25 M8 GTE in anticipation of the third caution period lead to split strategies for the two cars. Krohn, in the No. 24 M8, inherited the lead and the fast Fin stretched his stint to the 43rd lap and just shy of the race’s halfway point before it was the No. 24’s crew time for an anticipatory call to the pits. Krohn dove to the pits just before the race’s fourth yellow flag, and the resulting pit lane closure, to hand off to John Edwards. When the pits were opened three laps later, the balance of the GTLM field – and Edwards – pitted under yellow. As Connor De Phillippi entered the No. 25 machine, Edwards took a splash of fuel and jumped to the class lead.

With both BMWs just outside the window to make it to the end, the die was now cast – Edwards would be the hare and push, needing one more caution period to make it, and De Phillippi, the tortoise (a very fast tortoise) would save fuel, in case that yellow did not come. With Edwards first and De Phillippi second it looked like a second consecutive double podium finish was in the cards, but on lap 93 Edwards pitted from the lead to take a splash of fuel. De Phillippi took over the lead and held off the No. 912 Porsche for the final seven laps to win by some three seconds.

Connor was able to keep up a very good pace.” said Bobby Rahal, Team Principal. “It was tight on fuel and to be frank, I wasn’t so sure we were going to pull it off and then we had to stop with John [Edwards} which was unfortunate because he was doing great. He and Jesse ended up 4th though we split the Corvettes. For Alexander and Connor, what a great win. For our team, this is three wins in four years at Laguna Seca and the checkered flag will be flying over our headquarters in Columbus. I am just really happy for BMW and for the whole team. Everyone works hard on this program, both in Munich and in Columbus. We even had some Indy Car people helping out this weekend. Great team effort!”

Victor Leleu, BMW NA Motorsport Manager added “Two wins in a row. I think this is now three wins in four years with three different cars at Laguna Seca for BMW Team RLL. It certainly goes to show that all of the effort that has gone into the program is starting to really pay off. Here and at VIR, two very different tracks, but wins at both shows the quality and versatility of the new BMW M8 GTE and the fantastic effort put in by the team and by the drivers. Congratulations to everyone at BMW Team RLL. We can’t wait to go to Petit Le Mans and finish the season in style.”

Connor De Phillippi, driver No. 25 BMW M8 GTE (P1):
“Wow, what a day! Eventful in the beginning with lots of yellows. We knew we were in a good position in the end. We had to be fuel efficient and the engine did exactly that. I did the job I needed to behind the wheel and the team made all the right calls. Super happy for the team. It was definitely a team effort! We can be proud of our two results, one of them was on pure pace and today’s was a really intelligent race. Now we go on to Petit and look forward to having Bill Auberlen part of the team again and try to close the season out on a positive note.”

Alexander Sims, driver No. 25 BMW M8 GTE (P1):
“What a job by the whole team! We took a decision on the strategy to fuel save and extend that last stint. Connor did an absolutely awesome job to save fuel and keep a good pace. Absolute credit to the team and to Connor for winning that race by having that mega last stint. So pleased to get this second win in the new BMW M8 GTE!”

John Edwards, driver No. 24 BMW M8 GTE (P4):
“With the last yellow falling outside of our fuel window, the team decided to split the fuel strategy. We were the car in front and got to go flat out and the other car had to save a lot of fuel. We were hoping for just one more yellow, even a short yellow to get us a few more laps to make it to the end. Unfortunately for us but fortunately for our sister car that yellow never came and they made it on their strategy.”

Jesse Krohn, driver No. 24 BMW M8 GTE (P4):
“The team did an amazing job getting the car ready and giving us such a great race car for this weekend. On our car unfortunately, the gamble on fuel strategy did not pay off but I am super happy for our sister car and their win. The whole team has put in a lot of hard work this season and they deserve it.”

The No. 96 Turner Motorsport BMW M6 GT3 of Bill Auberlen and Robby Foley was credited with a 12th place GTD class finish after retiring on lap 41 from damage resulting from Auberlen being pushed off the track during the race’s second restart on lap six.

The eleventh and final round of the 2018 IMSA WeatherTech SportsCar Championship, the Motul Petit Le Mans, will take place at Road Atlanta on Saturday, Oct.13th and be broadcast live on FOX Sports 2 beginning at 12:00 p.m. ET.