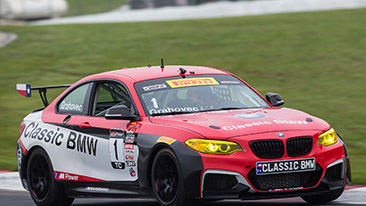 Woodcliff Lake, N.J. – May 23, 2017…One of the world’s most challenging race tracks and changeable weather conditions faced the 14 BMW M235i Racing drivers entered in Rounds 3 and 4 of the 2017 Pirelli World Challenge Touring Car Championship at Canadian Tire Motorsport Park, in Bowmanville, Ontario, Canada.

Round 3:
Nick Wittmer, driving the No. 91 ST Racing M235iR, finished second in an accident plagued Round 3 race that was ended under a red flag after only nine laps around the venerable 2.45-mile, 10-turn CTMP circuit. Wittmer’s second podium of the season came after his team had to completely rebuild his BMW following a wreck in the final laps of the Round 2 race at Virginia International Raceway on the last weekend in April. 2016 TC champion Toby Grahovec finished fifth in his No. 1 Classic BMW Motorsports M235iR to record his best finish of the season. A total of five M235iR drivers finished in the top-10.

Round 4:
Mason Filippi, driving the No. 12 Winding Road Racing TFB M235iR, won the Round 4 PWC Touring Car race at CTMP with a fine drive after electing to start on dry tires even as rain was threatening at the start of the 40-minute contest. The victory was the first PWC win for the 19-year old, from Alamo, Calif., who, after starting 13th, bested the 26-car TC field by 25.9 seconds at the checkered flag, setting the fastest race lap (1:30.458 minutes) on his sixth lap of the 2.45-mile, 10-turn CTMP circuit. Five M235iR drivers finished in the top-10 and a total of 10 finished in the top-20.

Mason Filippi, driver No. 12 BMW M235iR: “Choosing the dry tires was the key to the win. The start of the race was dry and I had to come from mid-pack, but once it got wet I had to be smart to choose my passes and get through the traffic. It was an awesome day.”

Victor Leleu, BMW of North America Motorsport Manager: “A win and a second place finish always make for a very good weekend, but the circumstances in which these results were obtained make it even more special. Congratulations to Mason Filippi and the Winding Road Racing TFB team. They made the right tire call on Sunday and Mason won the race with style. I also want to acknowledge and applaud Nick Wittmer and everyone at Samantha Tan Racing for putting the No. 91 car back, not just on track, but on the podium after its terrible crash at VIR. ”