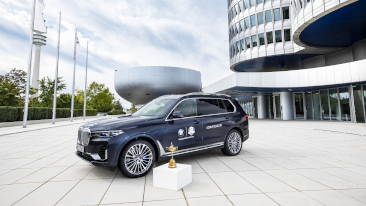 BMW is a Worldwide Partner of the prestigious international golf competition between the USA and Europe, which will take place from September 22 to 27, 2020.The #DRIVETOGLORY campaign launches with European captain Padraig Harrington at the iconic Wentworth Club, headquarters of the European Tour, the Managing Partner of Ryder Cup Europe.

Woodcliff Lake, N.J. – Sept. 25, 2019… The opening matches of the 2020 Ryder Cup will tee off in exactly 365 days at Whistling Straits in Kohler, WI. BMW, a worldwide partner of the Ryder Cup, will mark the countdown to the largest golf tournament in the world under the campaign slogan #DRIVETOGLORY at the Ryder Cup Year to Go celebration next week.

During the #DRIVETOGLORY journey, Worldwide Partner BMW will deliver the Ryder Cup Trophy to remarkable milestones connected to the rich history of The Ryder Cup.

“The Ryder Cup is unlike any other golf tournament – the prestige, emotions and interest around the world makes it unique. As a global golf partner for three decades, BMW is proud to be Worldwide Partner of the Ryder Cup for the first time next year,” said Stefan Ponikva, Head of Brand Experience, BMW. “#DRIVETOGLORY gets to the heart of what lies at the core of the Ryder Cup, and what makes it so fascinating. We are looking forward to the journey, which began with European Ryder Cup team captain Padraig Harrington at Wentworth, and which will culminate in another spectacular battle between the hosts from the U.S.A. and Ryder Cup Europe at Whistling Straits.”

The U.S. Ryder Cup Team is attempting to win its second consecutive Ryder Cup on American soil. The European Ryder Cup team handed the Americans a decisive victory at Le Golf National outside of Paris, France in 2018.