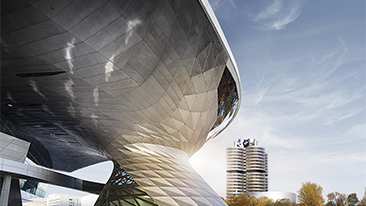 Munich, Germany- August 5, 2020… At the halfway stage, the BMW Group remains on course towards achieving its targets for the full year. After implementing controlled cutbacks at many of its plants in March as a response to the foreseeable drop in global demand, the Group initiated a coordinated restart of its production facilities in the second quarter. Since mid-June, all its manufacturing plants have again been working in regular shifts. Nonetheless, cost efficiency and cash management remain decisive factors for best controlling the consequences of the corona pandemic.

“Our swift responsiveness and consistent management strategy enabled us to limit the impact of the corona pandemic on the BMW Group during the first half of the year,” said Oliver Zipse, Chairman of the Board of Management of BMW AG, in Munich on Wednesday. Despite a significant market decline following the corona pandemic the BMW Group was able to achieve a positive profit before tax of € 498 million in the first half year. “We are now looking ahead to the second six-month period with cautious optimism and continue to target an EBIT margin between 0 and 3% for the Automotive segment in 2020. We are monitoring the situation very closely and managing production capacities in line with market developments and regional fluctuations in customer demand.”

The BMW Group remains committed to its plans; despite the highly challenging market environment, it will continue to invest in future-oriented technology fields and develop its expertise accordingly. As previously announced, the Group intends to invest more than € 30 billion in research and development up to 2025 with the aim of extending its leading edge in terms of innovation.

In order to accomplish the targets referred to above, the BMW Group continues to make the necessary upfront investment in future-oriented technologies. Group research and development expenses totalling € 2,734 million remained at a high level in the first half of the current financial year (2019: € 2,796 million; ‑2.2%). The figure includes expenses for the ongoing electrification process and, in particular, for developing the BMW iNEXT. As previously reported, capital expenditure on property, plant and equipment as well as on other intangible assets is being undertaken on a prioritised, highly focused basis. The total expense for the first half of the year amounted to € 1,477 million (2019: € 2,175 million; -32.1%).

“We are investing carefully and with a sense of proportion. In light of the current situation, we are either postponing or closely scrutinising our projects. As announced, we have also systematically reduced inventory levels during the second quarter with the aim of safeguarding free cash flow,” stated Nicolas Peter, Member of the Board of Management of BMW AG, Finance. “Our Performance Programme is making a significant earnings contribution. Over the past three years or so, this programme has laid the groundwork for key improvements, which we are now benefiting from and which enable us to drive forward the necessary changes.”

CO2 reduction to be achieved through millions of electrified vehicles

The Group’s second strategic focus is on sustainability. During the corona pandemic, the Board of Management has set some ambitious long-term targets. “Sustainability and digitisation are the key issues of the coming decade. Particularly in these challenging times we need to set the right course in this respect,” said Zipse. “We not only combine product excellence with state-of-the-art digital technologies – we also design them to promote our sustainability goals. Our customers as well as society in general will benefit from this strategy.”

For the first time across the entire life cycle of its products – from the supply chain to production and through to a vehicle’s end-of-life phase, the BMW Group has set itself clear targets for reducing its CO2 emissions up to the year 2030. Over this entire period, CO2 emissions per vehicle are to be reduced significantly by at least one third by 2030 compared with 2019 levels.

For instance, the CO2 emissions our vehicles generate during their lifetime are to be reduced by 40 per cent per kilometre driven. The key lever for achieving this target is a far-reaching product strategy that massively promotes the use of e-mobility. In ten years, the goal is to have a total of over seven million electrified BMW Group vehicles on the roads – some two thirds of which will be all-electric models.

The BMW Group is already a leading maker of electrified vehicles. By the end of 2021, it will be offering five all-electric, series-produced automobiles in the form of the BMW i3*, the MINI Cooper SE*, the BMW iX3*, the BMW iNEXT and the BMW i4. The next generation of the BMW 7 Series will mark a further important milestone. The flagship model of the BMW brand will be available with four different types of drivetrain, i.e. highly efficient diesel- and petrol-driven versions, an electrified plug-in hybrid and, for the first time, an all-electric BEV model. By 2023, the BMW Group intends to have 25 electrified models on the road – half of them all-electric versions.

Additional all-electric models in the pipeline

In addition to the BMW 7 Series, comprehensive electrification will continue to be rolled out across the Group’s model range. Further examples of the “Power of Choice” will be the highly popular BMW X1 and BMW 5 Series, which will also be available with all four drivetrain variants going forward – all-electric, plug-in hybrid, diesel and petrol.

“The best vehicles in the world are sustainable. Premium quality and sustainability will be increasingly linked going forward,” said Zipse. “We are leveraging our outstanding technological expertise in both hardware and software to make our vehicles desirable and at the same time help to minimise CO2 emissions.”

The BMW Group continues to work on significantly reducing the CO2 emissions generated by its current fleet of new vehicles and is again this year set to meet the stipulated CO2 fleet target for new vehicles registered in Europe in 2020. The figure is around 20% below the requirement stipulated for 2019. Systematic electrification of the model range is making a decisive contribution towards achieving this target.

Group revenues down in first half of year

Despite the overall sales volume decline, the number of electrified BMW and MINI vehicles delivered to customers rose to 61,652 units (+3.4%) in the six-month period. The ongoing expansion of the model range is expected to result in further growth in this area in the second half of the year.

The BMW Group sets itself ambitious targets, even in politically and economically turbulent times. Currently, however, the uncertainty caused by the global spread of coronavirus makes it difficult to make an accurate forecast of the BMW Group’s business performance for the full financial year 2020. For the twelve-month period as a whole, the BMW Group continues to assume that demand in all key markets will be significantly reduced in light of the coronavirus pandemic and the necessary containment measures.

As a consequence, worldwide deliveries for the Automotive segment in 2020 are likely to be significantly lower than one year earlier. Under the prevailing circumstances, the BMW Group expects the segment EBIT margin to lie within a range between 0 and 3% in 2020.

Mainly due to the negative economic outlook, the Financial Services segment is expected to generate a lower volume of new business amidst a potentially more volatile risk environment. Accordingly, a moderate year-on-year drop in return on equity is forecast for the segment.

Motorcycles segment deliveries are expected to decrease significantly compared to the previous year. The EBIT margin is currently forecast to lie within a range between 3 and 5%.

Taking account of the various factors described above, Group profit before tax is expected to be significantly lower than in 2019.

The workforce size will be slightly below the level recorded one year earlier. The personnel-related measures previously communicated will be used to manage the workforce size. Under the current circumstances, all new recruitment is subject to stringent critical review.

As previously reported, the outlook does not take account of the following factors: a prolonged, deep recession in key sales markets; an even more pronounced cyclical downturn in the Chinese economy caused by recessions in other economic regions; major supply disruptions in the wake of even greater competition; the potential impact of a second wave of infection and the associated containment measures. The BMW Group is monitoring developments closely and remains well prepared to act swiftly and efficiently.

1 In connection with a review of its sales and related reporting practices, BMW Group reviewed prior period retail vehicle delivery data and determined that certain vehicle deliveries were not reported in the correct periods. Further information can be found in BMW Group’s 2019 Annual Report on page 54. As an update of the information given there, BMW Group has revised the data on vehicle deliveries retrospectively going back to 2015 in its sixteen most significant markets.
2 Value for HY1 2019 includes a profit from discontinued operations of € 44 million

1 In connection with a review of its sales and related reporting practices, BMW Group reviewed prior period retail vehicle delivery data and determined that certain vehicle deliveries were not reported in the correct periods. Further information can be found in BMW Group’s 2019 Annual Report on page 54. As an update of the information given there, BMW Group has revised the data on vehicle deliveries retrospectively going back to 2015 in its sixteen most significant markets.


The BMW Group
With its four brands BMW, MINI, Rolls-Royce and BMW Motorrad, the BMW Group is the world’s leading premium manufacturer of automobiles and motorcycles and also provides premium financial and mobility services. The BMW Group production network comprises 31 production and assembly facilities in 15 countries; the company has a global sales network in more than 140 countries.
In 2019, the BMW Group sold over 2.5 million passenger vehicles and more than 175,000 motorcycles worldwide. The profit before tax in the financial year 2019 was € 7.118 billion on revenues amounting to € 104.210 billion. As of 31 December 2019, the BMW Group had a workforce of 126,016 employees.
The success of the BMW Group has always been based on long-term thinking and responsible action. The company has therefore established ecological and social sustainability throughout the value chain, comprehensive product responsibility and a clear commitment to conserving resources as an integral part of its strategy.