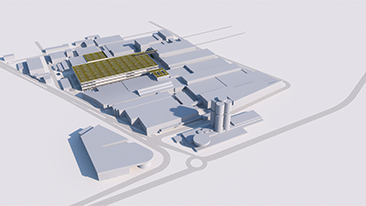 Munich, Germany- November 19, 2020… The BMW Group is speeding up the shift towards electromobility and strengthening its global network for production of electrified vehicles. The company is investing 400 million euros in a new vehicle assembly at the main plant in Munich and concentrating its European production activities for internal combustion engines at the Steyr and Hams Hall locations. “We are systematically implementing our electrification strategy. By the end of 2022, each of our German plants will be producing at least one fully electric vehicle,” according to Milan Nedeljković, member of the Board of Management of BMW AG responsible for Production.

The BMW Group has one of the automotive industry’s most flexible production systems worldwide. “We are capable of producing both vehicles with combustion engines and electric drive trains on a single line and responding flexibly to customer requests,” said Nedeljković: “This is a crucial success factor.” Nedeljković has been in charge of the Production Division for just over a year. “During the Covid-19 crisis, we have proved that we can respond swiftly and effectively to even highly volatile market developments and, at the same time, permanently improve our cost structure,” underlined the Production head. “The progress made this year will reduce our fixed costs by about half a billion euros by the end of the coming year. Construction of new vehicle assembly at Plant Munich
The BMW Group is systematically gearing its main plant in Munich towards the future. Following the expansion of the body shop and construction of a new resource-efficient paint shop between 2016 and 2018, the company will be investing around 400 million euros in a new vehicle assembly between now and 2026. “We are continually developing Plant Munich towards electromobility and creating efficient and competitive production structures for this purpose,” explained Nedeljković. “This decision signals our strong commitment to the Munich location.”

Manfred Schoch, Deputy Chairman of the Supervisory Board and Chairman of the European and General Works Council of BMW AG: “The decision to build a new assembly at our almost 100-year-old Munich plant shows that transformation can secure, and even create, industrial jobs in the heart of the city – if it is approached strategically, and with courage. This decision provides a model for successful transformation in the German industry.”

The future assembly and its production processes will be designed for a new cluster architecture geared towards electric drive trains. Nedeljković: “This architecture will be in use from the middle of the decade. It will ramp up for the first time at our future plant in Debrecen, Hungary, before being rolled out across our global production network in stages.”

The new assembly in Munich will be built on the site currently used for engine production. The combustion engines with four, six, eight and 12 cylinders produced there will be manufactured at the company’s locations in Steyr in Austria and Hams Hall in the UK going forward. “Restructuring our engine production network is a strategic move geared towards the future. We are also boosting our efficiency and optimising our capacity utilisation,” explained Nedeljković.

Engine production will be relocated from Munich in stages by no later than 2024.

The employees will go on to work in different planning and production areas at the Munich location or other sites in Bavaria. At its Competence Centre for E-Drive Production in Dingolfing alone, the company will increase employee numbers from 1,000 currently to up to 2,000. “The transformation of our plants and securing future jobs go hand in hand,” underlined Ilka Horstmeier, member of the Board of Management of BMW AG responsible for Human Resources, with regard to the upcoming structural changes in engine production. “Here in Munich, we will prove once again that the BMW workforce can handle change. Our employees will receive intensive support and training throughout this process.” More than 50,000 people at BMW Group have already been trained for electromobility since 2009.

Transformation towards electromobility
The realignment of the production network is based on three priorities: transformation towards electromobility and digitalisation; efficiency of processes and structures; and sustainability in production and logistics. The expansion of electromobility in the production network continues. Our Chinese plant in Dadong also began producing the BMW iX3* this year. “By the end of 2022, all German plants will have at least one fully-electric vehicle in their programme,” underlined Nedeljković. From next year, the BMW i4 and BMW iX* will come off the production lines in Munich and Dingolfing respectively. Fully-electric variants of the new BMW 7 Series and the future BMW 5 Series are also ready to go in Dingolfing. Plant Regensburg will also start manufacturing the new BMW X1 in 2022, which will be available both with an combustion engine and a fully-electric drive train. From 2023, BMW Group Plant Leipzig, which has built the iconic BMW i3* electric car since 2013, will produce the successor to the MINI Countryman, with a combustion engine and as a fully-electric variant.

At the same time, the BMW Group is expanding its capacity for manufacturing electric drive trains. The company is investing in production equipment for highly integrated e-drives and high-voltage batteries at the Competence Centre for E-Drive Production in Dingolfing. The Leipzig and Regensburg locations are also currently setting up equipment for production of battery modules and high-voltage batteries from 2021. In parallel, the company is also increasing production capacity for e-drive housings at Plant Steyr.

“Allocating capacity in this way places a deliberate emphasis on the flexibility of our plants and makes them more efficient and more competitive. Long-term agreements with employee representatives also play an important part in this,” added Nedeljković.

Sustainability in production
The BMW Group has reduced resource consumption and CO2 emissions in vehicle production by 50 percent since 2006 – which is much more than other European manufacturers. The amount of CO2 generated per vehicle will be reduced by another 40 percent from 2019 levels by 2025 and 80 percent by 2030. “Sustainability is a fundamental aspect of modern production,” underlined Milan Nedeljković, adding: “By the end of this year, our plants worldwide will obtain their electricity exclusively, 100 percent, from renewable energy sources.” To do so they will take advantage of the best options at each location – from solar energy in Oxford, Mexico and China, to biogas in South Africa, to wind power in Leipzig.

In addition to using renewable energies, water, solvent, gas and electricity consumption will be further reduced in parallel. For example, the company is using data analytics to minimise machines’ power consumption. The amount of waste per vehicle is also continuously decreasing, making the BMW Group one of the world’s most sustainable automotive manufacturers. The BMW Group’s position as sector leader in the “Automobiles” category of the Dow Jones Sustainability Indices World and Europe, announced just a few days ago, underlines this.