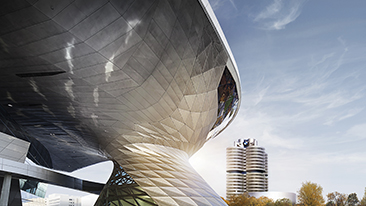 Munich, Germany- November 7, 2017… As set out in its Strategy NUMBER ONE > NEXT, the BMW Group is committed to playing a key role in tomorrow’s mobility and is investing substantially in new technologies. Against this background, the Group can report after the first three quarters that it remains firmly on track to complete a highly successful financial year 2017. Through sustainable profitability, the BMW Group is strengthening the position of Germany as a centre of expertise and driver of innovation for tomorrow’s mobility and technologies. As the world’s leading provider of premium mobility, the BMW Group always focuses on the needs and desires of its customers and is continuing its ground-breaking work on the four ACES topics (Autonomous, Connected, Electrified and Services/Shared).

“We are resolutely doing things the BMW way, keeping our promises and raising the bar for our own ambitious targets,” stated Harald Krüger in Munich on Tuesday. “We are investing substantially in tomorrow’s mobility, enabling us to maintain our leading position of innovation and sustainable employment. In this way, we remain a dependable partner for society, policymakers and the environment as well as one of the most attractive employers worldwide.”

The BMW Group is currently investing 400 million euros in the large-scale expansion of its Research and Innovation centre (FIZ) in Munich to create an innovative working environment for around 5,000 employees by 2019. Additionally, from 2021 onwards, the BMW iNEXT will set new standards in terms of electric mobility, automated driving and connectivity, thereby further enhancing the Dingolfing production plant. As the BMW Group’s centre of competence for electric mobility, Plant Dingolfing already supplies components to the company’s production network.

In the third quarter, the first employees moved to the new Autonomous Driving Campus near Munich and are now working there hand in hand with partners from Intel and Mobileye on the continued development of autonomous driving. With Fiat Chrysler Automobiles as well as Delphi, Continental and Magna, four additional partners are already collaborating to create a non-exclusive platform for autonomous driving. “These developments underline the success story that has been evolving over the past year with the unique cooperation arrangements and provide additional impetus to embark on the next steps,” said Krüger.

With its Strategy NUMBER ONE > NEXT, the BMW Group has shown its clear technological focus on electric mobility, digitalisation and autonomous driving. By 2025, the BMW Group intends to offer 25 models across all of its brands, featuring either all-electric propulsion or plug-in hybrid solutions. The fifth generation of storage and powertrain technology is set to provide up to 700 kilometres of range for all-electric vehicles and up to 100 kilometres for plug-in hybrid models.

“Around a decade ago, we anticipated the ‘iconic change’ and we put forward a clear strategy – far ahead of our competitors,” stated Krüger. “We remain on track to deliver more than 100,000 electrified vehicles in the current year.” Crucial for the long-term transition from combustion engines to e-mobility is the flexibility factor, as technological change is likely to take place at various speeds, depending on the region and the respective regulatory regimes. The BMW Group is therefore fully committed to flexible architectures and modules. The combination of new vehicle architectures and flexible production facilities will enable quick decisions to be made on how many of which models should be produced and with which drive systems.

At the IAA in Frankfurt, the BMW Group revealed the BMW i Vision Dynamics, an emotional symbol for the future of e-mobility in the form of a four-door Gran Coupé. “With this concept vehicle, we are electrifying the very heart of the BMW brand and raising BMW i to a new dimension at the same time,” stated Krüger. “We will build this model at our Munich plant, thereby highlighting Germany’s importance as a location for electric mobility.”

A successful core business, geared to generating long-term profitability, remains the backbone of the BMW Group, providing the underlying strength to determine the shape of mobility going forward. The BMW Group recorded volume, revenue and earnings growth in the first nine months of 2017. The new BMW 5 Series, along with other models, contributed to this success, impressing customers and experts alike. Its launch in February 2017 marked the start of the largest model offensive in the BMW Group’s history.

Some forty new and updated models of the Group’s three premium brands, BMW, MINI and Rolls-Royce, will be brought to market during the current and the following year. Through the addition of vehicles with great emotional appeal within the upper-premium segment such as the new BMW 8 Series, the BMW Group aims to achieve significant volume growth in this segment by 2020. The segment also includes the BMW 7 Series and the future BMW X7. This forms part of the company’s strategy of strengthening the performance side in order to ensure long-term business success.

“Sustainable profitability remains a key element of Strategy NUMBER ONE > NEXT by providing us with the underlying strength to help shape mobility of the future. Significant upfront investment on research and development is therefore necessary, both now and in the coming years,” explained Nicolas Peter, Member of the Board of Management of BMW AG, Finance. “We are investing extensively in the future of the BMW Group and rigorously following a strategy of achieving success on a sustainable basis. To this end, we are systematically reducing process and product complexity on a daily basis and optimizing our product and service range to meet the needs of customers. In this way, we will ensure the consistency and reliability of the BMW Group.”

Deliveries of BMW brand vehicles worldwide totalled 1,537,497 units (2016: 1,479,936; +3.9%), surpassing the 1.5 million mark for the first time in the first three quarters of a financial year. Volume growth was driven by a variety of models including the BMW Group’s flagship BMW 7 Series, and the BMW X-family models. Nearly 48,000 units of the BMW 7 Series were delivered to customers during the first nine months of 2017, 14.7% more than one year earlier. Deliveries of the BMW X1 rose in this period by 38.7% to more than 200,000 units. The BMW X5 deliveries increased by 7.2% to over 130,000 units. In China, the new generation of the BMW 5 Series is still in model changeover. Outside China, deliveries are already well above the previous year’s level: in September, the increase was 48.8%. The growing availability of the 5 Series should generate additional momentum as the year progresses.

The Goodwood-based Rolls-Royce brand delivered 2,343 (-10.7%) cars to customers in the first three quarters of the year. This result takes into account the current absence of Phantom from the market, pending first customer deliveries of New Phantom in January 2018, and challenging market conditions within the global luxury sector in a number of regions around the world. Significant rebalancing of the company’s manufacturing plant in preparation for new models has proceeded throughout this period. New Phantom was unveiled in July in London to worldwide acclaim and already has a strong order book.

In line with its strategy of achieving a well-balanced distribution of sales worldwide, the BMW Group uses its highly flexible production, sales and marketing structures to even out fluctuating demand between individual regions. In Europe, the BMW Group recorded volume growth of 1.1%, delivering 816,233 units in the first nine months of the year (2016: 807,597 units), despite the recent headwinds affecting a number of key markets.

Volume performance in the Americas region was held down by the contracting automobile market in the USA, with deliveries in the nine-month period falling by 3.4% to 326,589 units (2016: 338,005 units). By contrast, a double-digit percentage increase was reported in Mexico and Latin America during the period from January to September.

The size of the Group’s workforce increased by 2.8% year-on-year to stand at 129,545 employees at 30 September (2016: 126,013). The BMW Group continues to recruit skilled workers and IT specialists in future-oriented areas, such as digitalisation and automated driving.

The BMW Group is confident of achieving its projected targets for the current financial year – largely thanks to its strong brands, its attractive product portfolio and the expectation that international automobile markets will continue their generally positive trend. These favourable factors are offset by high levels of upfront expenditure for key new technologies, intense competition and rising personnel expenses. The global political and economic environment is expected to remain volatile.

For the financial year 2017, the BMW Group forecasts a slight increase in deliveries to customers by the Automotive segment and a solid (previously: slight) increase in Group profit before tax, in both cases to new record figures. “At the same time, we continue to expect higher expenditure in the fourth quarter for key technological and strategic projects as well as the roll-out of the largest model offensive in the history of the BMW Group. Other factors to bear in mind are the politically volatile environment and high upfront expenditure for electric mobility and autonomous driving”, explained Krüger.

The EBIT margin for the Automotive segment in 2017 is forecast to remain within the target range of between 8 and 10%. With its premium brands, the BMW Group is confident it will remain the world’s leading provider of premium mobility in 2017. The BMW Group forecasts a slight (previously: solid) increase in revenues in the Automotive segment. Forecasts for the current year are based on the assumption that global political and economic conditions will not change significantly