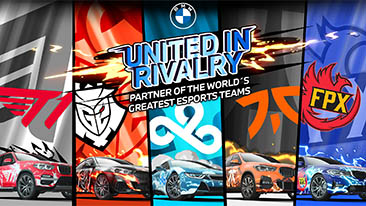 Woodcliff Lake, NJ – April 16, 2020… The BMW Group announced today the expansion of its involvement in the esports world, including the launch of a new international platform and partnerships with five of the world’s leading esports organizations, including Cloud9 (U.S.), Fnatic (UK), FunPlus Phoenix (China), G2 Esports (Germany) and T1 (South Korea).  These new collaborations will include content development across social media, information sharing, and technology transfer with its engineers and designers on hardware and software.  BMW Motorsport is also continuing its simulated (sim) racing activities to build on success from 2019.

“Joining forces with the best teams in the world, we aim to use our design and innovation skills to help shape the discipline in the long term,” said Jens Thiemer, senior vice president consumer and brand for BMW.  “Our esports involvement is an important milestone providing, for the first time, a new intersectionality with a dynamic and fast-growing community.  We consider esports a promising, growing addition to our marketing activities.”

True Collaboration with Esports Team Globally
Cloud9, Fnatic, FunPlus Phoenix, G2 Esports and T1 comprise up to 200 players competing in tournaments globally including League of Legends, Dota 2, Fortnite, and more.  Typically, these events are hosted in large multi-purpose venues, with thousands of fans in attendance and millions more watching and engaging online.  BMW will create unique content on various social media platforms such as Twitter, Instagram, Facebook, and Twitch under the umbrella of the #UnitedInRivalry hashtag.

“We’re thrilled to expand our partnership with BMW to the global front and continue to uphold shared pillars of excellence and peak performance,” said Jack Entienne, CEO and Co-Founder of Cloud9.  BMW initially joined forces with Cloud9 in March 2019.  “We welcome the outstanding teams that we’ll work alongside to drive competitive excellence forward with BMW.”

Information sharing and technology transfer in the service of esports.
The collaboration between BMW and the esports teams is very wide-ranging and goes far beyond mere sponsorship. Among other things, BMW shares the knowledge and expertise of its engineers and designers, to enable the development of hardware and software products perfectly tailored to gamers’ needs.

Eye-catching BMW models used as future team vehicles.
The BMW commitment also includes the provision of official team vehicles. Among these, each organization will have a team car featuring a custom livery with striking style and each organization’s logo. These eye?catching liveries, developed jointly by the teams and BMW, form another key element of this close partnership.

The BMW Group first attracted major attention in the esports world in 2017 when BMW served as the official partner of the European League of Legends finale in Paris. Its expansion in the space comes at a time of intense global challenges initated by the COVID-19 pandemic; as millions of people worldwide join “stay-at-home” initiatives, BMW is proud to promote a safe, healthy and distant way of socializing with the common goal of “flattening the curve” in the U.S. and abroad.

“We applaud all the gamers globally who are staying home, doing their part to stay healthy – and keep others healthy, so we are joining their commitment with #UnitedAtHome,” said Uwe Dreher, Vice President of Marketing at BMW of North America.  “We know we are all in this together, so we want to support our teams and iRacing initiatives who are providing much needed entertainment right now.”

BMW Motorsport Virtually Connects with U.S. IMSA Fans
In the U.S., BMW Motorsport is engaging with its racing fans through the IMSA iRacing Pro Series, which began with the IMSA Sebring SuperSaturday event in March 2020. BMW Motorsport achieved a podium sweep in the event, as Bruno Spengler took 1st place in his virtual BMW M8 GTE. Following Spengler were Nicky Catsburg (P2) and Jesse Krohn (P3), also representing BMW Motorsport. The virtual series represents IMSA’s efforts to continue racing activities in a safe and socially distant manner; BMW will be represented by multiple drivers and teams, including BMW Motorsport and customer racing teams, in future events.