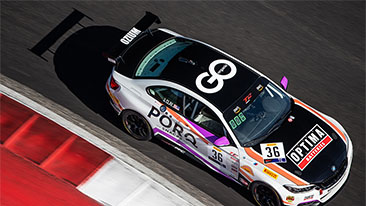 “BMW of North America is pleased to continue to support BMW Customer Racing drivers and teams for another SRO season,” said Victor Leleu, BMW NA Motorsport Manager. “We shared a highly successful season last year and, I believe, we’ll go from strength-to-strength in 2021. This weekend will see some very familiar faces and one new one as the BMW M2 CS Racing makes its North American racing debut. We appreciate everything all of our drivers do, and I look forward seeing them on the top step of the podium.”

Turner Motorsport will enter the No. 96 BMW M6 GT3 in the GT World Challenge class for 2020 Pirelli GT4 America SprintX ProAm Champions Michael Dinan and Robby Foley. The duo had a stellar run in the series last year and fought a fierce season-long battle to take the title home with a mere two-point margin.

BMW is the most popular brand on the Pirelli GT4 America grid with ST Racing once again running two cars with the Pro-Am lineup featuring 2018 TCR champion Ryan Eversley and veteran Ferrari Challenge racer Joe Rubbo in the No. 28 M4 GT4. BimmerWorld Racing, who finished third overall in the Pro-Am division last season, returns with an expanded three-car lineup, two in Pro-Am, featuring legend Bill Auberlen and James Walker in the No. 34 and team owner/driver James Clay and Nick Galante sharing the No. 36. 2019 Champions Stephen Cameron Racing return with their bright orange and blue-liveried machine for Gregory Liefooghe and Sean Quinlan, looking to regain their crown in the No. 119. RHC Jorgensen/Strom will field an entry in the competitive category with Brett Strom and Daren Jorgensen behind the wheel of the No. 450.

The BMW M240i Racing car will be five strong on the TC class grid as Classic BMW returns with a single entry for 2020 Driver’s Championship runner-up Toby Grahovec, again a championship favorite, in the No. 26. Hard Motorsports will field two entries for Steve Streimer in the No. 30 and Adam Harding in the No. 31. Auto Technic Racing rounds out the group with Austen Smith piloting the No. 51 and Tom Capizzi the No. 52.

In TCX, KMW Motorsports with TMR Engineering will enter the No. 5 BMW M2 CS for Roy Block and series regulars Classic BMW will bring the No. 81 for Jacob Ruud and the No. 27 for Tommy McCarthy.