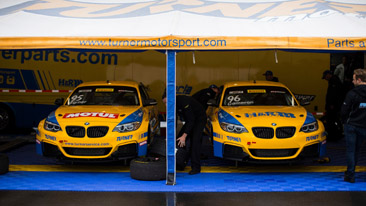 Woodcliff Lake, N.J. – May 30, 2017… A record 18 BMW M235i Racing drivers were entered in Rounds 5 and 6 of the 2017 Pirelli World Challenge Touring Car Championship at Lime Rock Park, in Lakeville, Conn. The BMW headline was the return of Turner Motorsport to Pirelli World Challenge Touring Car competition with two BMW M235i Racing cars for team owner Will Turner and Dane Cameron. For Turner, the weekend would mark his 120th and 121st professional starts. For Cameron, the weekend would result in a third place finish in Round 5 and a victory in Round 6. Four-time PWC champion Randy Pobst would also be making his debut drive in a BMW M235iR.

Dane Cameron started the No. 96 TMS BMW M235iR from the third position. Cameron, a veteran TMS driver, ran the entire 40-minute race within the top-3 positions, ultimately finishing third. Toby Grahovec, driving the No. 1 M235iR finished fourth and CTMP Round 4 winner Mason Filippi, driving the No. 12 M235iR, in fifth. Nick Wittmer’s No. 91 M235iR finished eighth. A total of six BMW M235iR drivers finished in the top-10, including Pobst in 10th.

Round 6:
With a strong start from the fifth starting spot, Dane Cameron jumped his No. 96 M235iR into the second position as the green flag flew to start the 40-minute Round 6 race. By the eleventh lap of the classic Lime Rock Park circuit Cameron moved into the lead. Two caution periods for cars off track slowed the pace of the race, but Cameron held the point through both restarts. At the checkered flag, it was Cameron first. Nick Wittmer, driving the No. 91 BMW M235iR secured fourth after a strong pass on lap 30, with Anthony Magagnoli, in the No. 80 M235iR, and Mason Filippi, driving the No. 12 M235iR, following in fifth and sixth respectively. Toby Grahovec, driving the No. 1 M235iR finished eighth to make it a total of five BMW drivers in the top-10.

Dane Cameron, driver No. 96 BMW M235iR: “While I have had experience in the GT classes of PWC, these two rounds were my first Touring Car races. It was a lot of fun. You can follow close, run side-by-side, making for great racing among some very different types of cars. The M235iR is a very approachable car to race. As a package it is complete and certainly has enough of everything to get the job done.”

Victor Leleu, BMW of North America Motorsport Manager: “It’s always special to see a BMW on the top step of the podium at Lime Rock, even more so today after such an intense battle. Congratulations to everyone at Turner Motorsport on a stellar performance at their home track. On the whole we’re happy with how the first half of the season went and look forward to the Western part of the championship.”

Rounds 7 and 8 of the 2017 PWC Touring Car Championship will be held at the Utah Motorsport Complex, in Tooele, Utah on August 11 – 13.