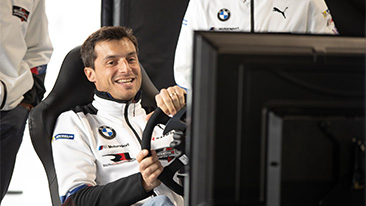 Munich, Germany- June 10, 2020… Bruno Spengler (CAN) heads into the season finale of the IMSA iRacing Pro Series at the virtual track at Watkins Glen (USA) on Thursday with a good chance of winning the title as leader of the overall standings. The BMW works driver has used the enforced break in real-life racing to make a name for himself as a sim racer as well. In an interview, he explains the value that the virtual races also have for his development as a real-life racing driver, how important a sim racing title would be to him and what his expectations are for the planned continuation of the IMSA WeatherTech SportsCar Championship season in July.

Bruno, could you have imagined six months ago that you might be celebrating your first title win in a virtual race series on Thursday?

Bruno Spengler: “Of course not. Nothing that has happened in recent months could have been predicted in any way, but what I have experienced in sim racing during this time is cool. If someone had said to me at the beginning of the year that I would contest a virtual IMSA series against many of my real-life driver colleagues and would be leading the championship going into the season finale, or that I would compete in races at the Nürburgring-Nordschleife alongside professional sim racers and would even win, I would have said ‘Yeah, right!”

How important is a virtual title win to you?

Spengler: “I would be delighted, because success in a series with such a strong field is of great significance to us as racing drivers. I’m very ambitious and want to be really good at everything I do. I’ve spent a corresponding number of hours practicing over the past months. I gave it my all from the very first race to be successful in the IMSA iRacing Pro Series. It has worked really well so far, but just like in real-life racing anything can happen. I might end up standing still in the first turn on the final race and losing everything so I’m keeping both feet on the ground.”

Bruno Spengler and sim racing: How did it start?

Spengler: “I first came into contact with professional sim racing at the ADAC SimRacing Expo last September. Before that I had raced now and again for fun, but it wasn’t until the expo that I saw the extremely high level at which it is possible to be involved in sim racing. After my first laps in the simulator it soon became clear that I was way off the pace of the best sim racers. Even though my lap times weren’t all that bad for a beginner, that experience opened my eyes. My ambition was aroused, and I decided to get a new simulator.”

Spengler: “I didn’t have a lot of time to practice immediately afterwards because it was during racing season, but in winter – just before the current crisis – I got my new simulator and started to concentrate on it and practice seriously. With hindsight it was perfect timing, because when the crisis started I wasn’t allowed outside anymore and was able to spend a lot of time at the wheel. That opportunity to keep racing from home was particularly valuable to me. Every day I appreciated my good fortune of being able to keep pursuing my passion.”

How does sim racing benefit you when it comes to real-life racing?

Spengler: “Sim racing is the perfect practice for me in this special situation, but also at times without racing in general. Primarily it enhances your ability to concentrate. Since my simulator is static, I don’t have the movements and forces that I’m used to in a real racing car. I only have my eyes on the screen, my feet on the pedals and my hands on the steering wheel to feel what the car is doing. Without the accompanying movements it is much more difficult to stay focussed over a long period – particularly in hotly contested races like in the IMSA iRacing Pro Series and the DNLS powered by VCO. In addition to the excellent concentration training, in my opinion sim racing even teaches driving feeling. Because the right racing line in the simulator is also the right racing line on the real racetrack I can take many of my experiences in the simulator with me into the real racing car. An important factor for me is that I am not just practicing alone, but alongside top-class professional sim racers from whom I can learn a great deal. Whether that’s when it comes to set-up work or searching for the perfect driving style.”

The virtual IMSA races in particular are helping you as a newcomer to this series to get to know the tracks, right?

Spengler: “Definitely. I’ve only contested races at Daytona and Sebring so far. I haven’t ever driven on the real versions of any of the other tracks. The fact that my simulator is now enabling me to practice intensively on all the tracks on the race calendar will no doubt help me a great deal when I’m on them in the real BMW M8 GTE for the first time. Obviously, someone who has already raced in real races on the tracks will still have an advantage, but at least I have a feel for what is in store for me when I get there.”

IMSA is planning to restart the season with another race at Daytona at the beginning of July. How eager are you to get back in the real BMW M8 GTE?

Spengler: “Very eager. I’m really looking forward to feeling the adrenaline and forces that you only get in a real race car again. You experience just as much nervousness and tension in the simulator, at the start, for example, but I do miss the other elements. What I am really missing is the crowd. The fans at the track make our events special. They give us the final push. We don’t have that in the simulator, and unfortunately, we will have to hold our opening real-life races without spectators, but I really hope that we will be able to race in front of our fans at the track again as soon as possible. It’s part of it for me.”

How much of a transition will it be going from the simulator to the real racing car?

Spengler: “It will be quick I think. Obviously, we will have to get used to the forces that have an effect in the real racing car again, but no doubt after a few laps we will back in the rhythm and ready to really get going.”

What are your goals for continuing your first IMSA season?

Spengler: “I’ll wait and see to start with. There are just too many tracks that I don’t know well enough yet for me to have specific goals. The BMW M8 GTE performed fantastically at Daytona in January, and our sister car won, but the characteristics of most of the other tracks on the race calendar are very different. So, I will wait and see and try to get to know the tracks in real-life as quickly as possible, and naturally I will be pleased with every good result that I am able to bring home with my team-mate Connor De Phillippi.”

Will you remain loyal to sim racing in the future?

Spengler: “Definitely! Whenever I am at home, I will keep practicing, particularly during the winter break because I really do enjoy sim racing.”