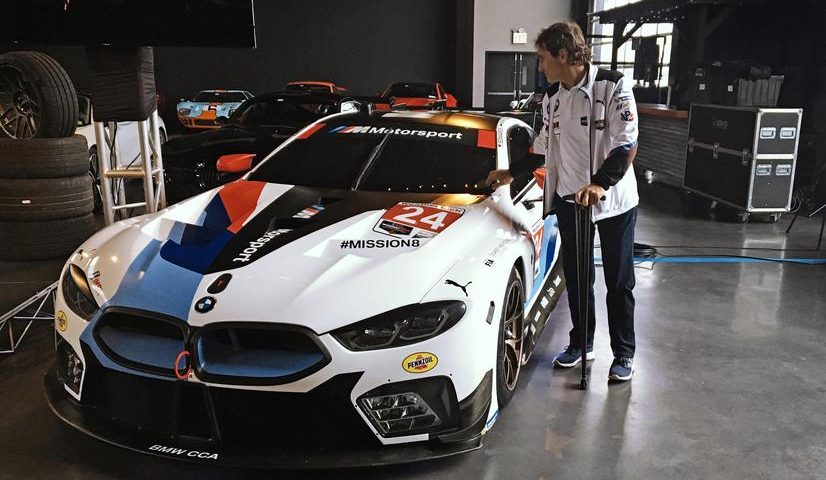 Munich, Germany- January 8, 2019… BMW works driver Alessandro Zanardi (ITA) attracted global attention with his start at the 24 Hours of Daytona (USA) in the BMW M8 GTE. The Italian was the focus of reporting all over the world and was the fans’ favourite at Daytona. Run by BMW Team RLL, the #24 BMW M8 GTE that Zanardi shared with John Edwards (USA), Jesse Krohn (FIN) and Chaz Mostert (AUS), had been modified with a special hand-operated braking system by BMW M Motorsport. After several minor set-backs in the race, the quartet came home ninth in the GTLM class. Victory went to the sister car, the #25 BMW M8 GTE, with Connor De Phillippi (USA), Augusto Farfus (BRA), Philipp Eng (AUT) and Colton Herta (USA) at the wheel. In an interview, Zanardi looks back at the “24 Hours of Daytona” project.

Alessandro, the big adventure is over. What was your highlight of the 24-hour race at Daytona?

Alessandro Zanardi: “It’s difficult to pin-point one thing. The highlight is what I’m bringing home – the impressions of this entire project – from the participation of every member of the team who made me feel really wanted in this adventure and from all the dedication and hard work that was displayed by all the engineers in Munich. It was fantastic to go through this adventure with all these people who are real friends. Of course, when it was announced that I would team up with one of the two works cars all my pride came second to the sense of responsibility for what I had to do. But having said that it’s been simply fantastic all the way. And on top of everything there was the support that I received from all the American people, fans, IMSA, even competitors down the pit lane – everybody just felt so happy to have me around. Of course, that is something which goes well above the sporting result we were aiming for, which unfortunately didn’t come – but that is motorsport.”

Even if, for your car, you did not get the result you had hoped for, you have a big smile on your face because your team BMW Team RLL got it: the long awaited victory at the 24 hours. How happy are you with that?

Zanardi: “Extremely happy. I’m extremely happy for the entire team. And because I am a little part of the team, a little bit of that victory is also mine and I’m bringing this back to Italy with me. I’m very proud for BMW. I’m very proud of all the hard work and dedication which is behind this effort. And I’m terribly sorry for the same people who worked so hard and with so much passion in preparing my car, my controls and everything because then we had the problems we had which is very unfortunate but as I just said: it’s motor racing.”

What was the biggest challenge in this project?

Zanardi: “To stay out of trouble is the name of the game at a 24-hour race. But in this situation, with these tricky conditions, you know I felt I was more vulnerable than everybody else in the field that is more experienced than I am. That goes on top of my personal problem, but I managed not to make mistakes, to drive to a decent level and I’m proud of that.”

Has there been something in this entire project that surprised you?

Zanardi: “Probably the very first time I went to Munich after we had our meeting where we had discussed everything and I sat in the car and everything was just right! In one way it is called technology – the fact that they have ways to design and to do things which long time ago would have taken much longer. But it also takes curiosity; it takes passion and dedication. That’s what characterises all the people at BMW M Motorsport. It’s hard to buy that.”

Let’s look ahead: what’s coming up for you now after this project?

Zanardi: “Well, it’s time to go back to my training because my muscles are suffering from the lack of exercise. I have a Paralympic campaign to prepare for but this was the perfect time for me to take a break from para-cycling and to fill my heart with new enthusiasm. I will use the time now to regain my top condition and hopefully have a good season in order to collect the points it takes to go to the Paralympic games in Tokyo.”